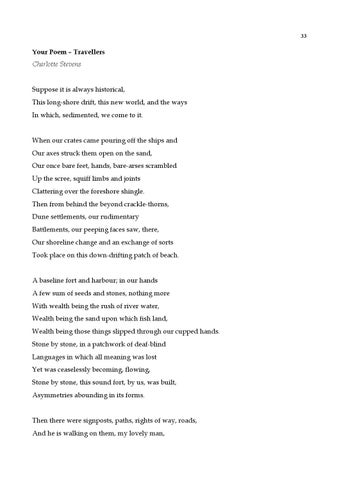 Your Poem â&#x20AC;&#x201C; Travellers Charlotte Stevens Suppose it is always historical, This long-shore drift, this new world, and the ways In which, sedimented, we come to it. When our crates came pouring off the ships and Our axes struck them open on the sand, Our once bare feet, hands, bare-arses scrambled Up the scree, squiff limbs and joints Clattering over the foreshore shingle. Then from behind the beyond crackle-thorns, Dune settlements, our rudimentary Battlements, our peeping faces saw, there, Our shoreline change and an exchange of sorts Took place on this down-drifting patch of beach. A baseline fort and harbour; in our hands A few sum of seeds and stones, nothing more With wealth being the rush of river water, Wealth being the sand upon which fish land, Wealth being those things slipped through our cupped hands. Stone by stone, in a patchwork of deaf-blind Languages in which all meaning was lost Yet was ceaselessly becoming, flowing, Stone by stone, this sound fort, by us, was built, Asymmetries abounding in its forms. Then there were signposts, paths, rights of way, roads, And he is walking on them, my lovely man, 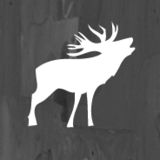