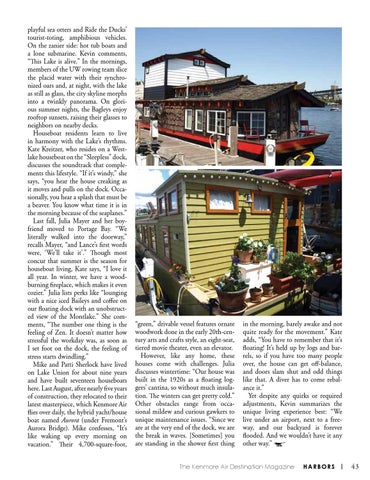 playful sea otters and Ride the Ducks’ tourist-toting, amphibious vehicles. On the zanier side: hot tub boats and a lone submarine. Kevin comments, “This Lake is alive.” In the mornings, members of the UW rowing team slice the placid water with their synchronized oars and, at night, with the lake as still as glass, the city skyline morphs into a twinkly panorama. On glorious summer nights, the Bagleys enjoy rooftop sunsets, raising their glasses to neighbors on nearby decks. Houseboat residents learn to live in harmony with the Lake’s rhythms. Kate Kreitzer, who resides on a Westlake houseboat on the “Sleepless” dock, discusses the soundtrack that complements this lifestyle. “If it’s windy,” she says, “you hear the house creaking as it moves and pulls on the dock. Occasionally, you hear a splash that must be a beaver. You know what time it is in the morning because of the seaplanes.” Last fall, Julia Mayer and her boyfriend moved to Portage Bay. “We literally walked into the doorway,” recalls Mayer, “and Lance’s first words were, ‘We’ll take it’.” Though most concur that summer is the season for houseboat living, Kate says, “I love it all year. In winter, we have a woodburning fireplace, which makes it even cozier.” Julia lists perks like “lounging with a nice iced Baileys and coffee on our floating dock with an unobstructed view of the Montlake.” She comments, “The number one thing is the feeling of Zen. It doesn’t matter how stressful the workday was, as soon as I set foot on the dock, the feeling of stress starts dwindling.” Mike and Patti Sherlock have lived on Lake Union for about nine years and have built seventeen houseboats here. Last August, after nearly five years of construction, they relocated to their latest masterpiece, which Kenmore Air flies over daily, the hybrid yacht/house boat named Aurora (under Fremont’s Aurora Bridge). Mike confesses, “It’s like waking up every morning on vacation.” Their 4,700-square-foot,

“green,” drivable vessel features ornate woodwork done in the early 20th-century arts and crafts style, an eight-seat, tiered movie theater, even an elevator. However, like any home, these houses come with challenges. Julia discusses wintertime: “Our house was built in the 1920s as a floating loggers’ cantina, so without much insulation. The winters can get pretty cold.” Other obstacles range from occasional mildew and curious gawkers to unique maintenance issues. “Since we are at the very end of the dock, we are the break in waves. [Sometimes] you are standing in the shower first thing

in the morning, barely awake and not quite ready for the movement.” Kate adds, “You have to remember that it’s floating! It’s held up by logs and barrels, so if you have too many people over, the house can get off-balance, and doors slam shut and odd things like that. A diver has to come rebalance it.” Yet despite any quirks or required adjustments, Kevin summarizes the unique living experience best: “We live under an airport, next to a freeway, and our backyard is forever flooded. And we wouldn’t have it any other way.” 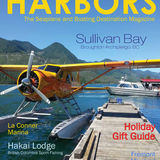