Grand Glory - Greatness all around 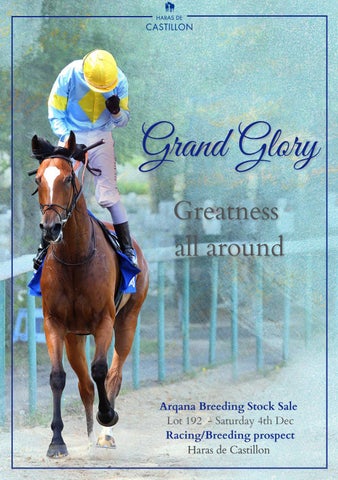 &quot;She was really extraordinary there because she had to really pick up just to get to the leader and then, there was a moment when I wondered if she could go past. But she was so courageous and Cristian gave her a brilliant ride.&quot;

Performing from 2 to 5-y-o, Grand Glory won or placed in no less than 11 Blacktype contests throughout her career and was in the money 13 times in 16 outings. She earned a Timeform rating of 120 when winning the Prix Jean Romanet Gr.1. In addition to her multiple Group successes, Grand Glory also placed in 2 Group 1 races, including a third place in the renowned Prix de Diane Gr.1 in 2019, just 3/4 of a length behind the winner and was beaten a nose in the Prix de l&#39;Opera Gr.1.

While earning her career-best win at 5-y-o, Grand Glory also has a 2-y-o form, breaking her maiden on debut in December.

As she remains in great shape, her future connections could look to send her back to the track before making any plans to breed her.

Grand Glory is a mare with an extraordinary mind, a true warrior who gave all her heart on the track in every race. Jockey Cristian Demuro

Grand Glory is the highest-rated mare in training in France

Grand Glory placed third in the 2019 Prix de Diane Gr.1, just 3/4 of a length behind the winner

Bred by Philip and Diane Lybeck, Amélie and Robert Ehrnrooth at Haras de Bourgeauville, Grand Glory was purchased as a yearling by Marco Bozzi at Arqana. Her entire career has been meticulously managed by her trainer Gianluca Bietolini.

&quot;In the Prix de Diane G1, she made an extraordinary performance. She displayed a very strong turn-of-foot and at this moment, I realised that she was as much as good as I always thought she was. She was outstanding in the Grand Prix de vichy G3 and in the Romanet, she litteraly left her rivals in the dust. Grand Glory showed so much during her career that I am convinced she will pass on her quality. She is so brave, has an enormous heart and an exceptional conformation.&quot;

&quot;We bought Grand Glory&#39;s grandam as a yearling, she was a good racehorse and we always thought of her as one of our foundation mare. We liked the cross within the family of Maria de la Luz and we wanted to do an inbreeding on Lady Rebecca and Pocahontas. We did it eventually and 6 years later, here we are&quot;. Breeder Philip Lybeck

&quot;I bought Grand Glory because she was a nice filly, a very good walker with a lovely expression and had a lot of quality overall. I think she has a bright future as a broodmare with such a pedigree and a fantastic racing career. She was so solid while competing, never had any problem, at 5yo, she is still racing and sound !&quot; Bloodstock Agent Marco Bozzi

Grand Glory on her way to win the Prix Jean Romanet Gr.1

Being free from the blood of Sadler’s Wells and Sunday Silence, Grand Glory represents an ideal outcross with those lines, and therefore, a potential great addition to a broodmare band.

French-based stallion Olympic Glory is the sire of 20 Stakes performers and two Gr.1 winners from his first crop of runners, including dual Gr.1 winner Watch Me. In 2021, he is the sire of Prix Jean Romanet Gr.1 winner Grand Glory, Group winners Mintd, Quick, Stakes winners Jannah Flower &amp; Blacktype performers Waldersee, Ursuly &amp; Zelandia. As a broodmare sire, Olympic Glory&#39;s daughters didn&#39;t have chances to produce thus far as they are still quite young and wouldn&#39;t have progeny of racing age yet. His sire Choisir, however, has developed into a leading broodmare sire and successful sire of sires. The daughters of Australia&#39;s trailblazing sprinter, are already the producers of 4 Group 1 winners.

Grand Glory is out of Madonna Lilly, the dam of recent Stakes scorer Bois d’Argent (Toronado) in training with Chantilly’s elite trainer Francis-Henri Graffard, who could improve to Group level next year. Her second dam, Listed-placed Maria de la Luz (Machiavellian) has proved herself to be quite a broodmare, being the producer of Group winner Minakshi. Further in her pedigree, remarkable Australian performances can be highlighted, thanks to Arapaho Miss &amp; Miami Bound, Group 1 winners. Finally, Grand Glory is a descendant of Lady Rebecca, notably the dam of stallion Alzao.

Offered as a Racing/Breeding prospect

Grand Glory - Greatness all around