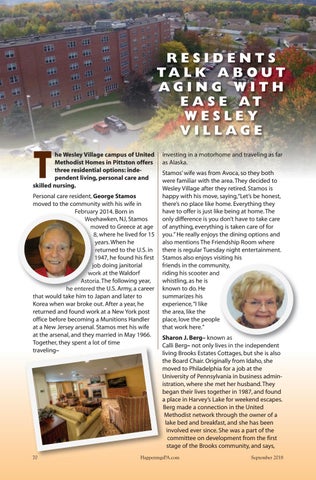 he Wesley Village campus of United Methodist Homes in Pittston offers three residential options: independent living, personal care and skilled nursing. Personal care resident, George Stamos moved to the community with his wife in February 2014. Born in Weehawken, NJ, Stamos moved to Greece at age 8, where he lived for 15 years. When he returned to the U.S. in 1947, he found his first job doing janitorial work at the Waldorf Astoria. The following year, he entered the U.S. Army, a career that would take him to Japan and later to Korea when war broke out. After a year, he returned and found work at a New York post office before becoming a Munitions Handler at a New Jersey arsenal. Stamos met his wife at the arsenal, and they married in May 1966. Together, they spent a lot of time traveling–

investing in a motorhome and traveling as far as Alaska. Stamos’ wife was from Avoca, so they both were familiar with the area. They decided to Wesley Village after they retired. Stamos is happy with his move, saying,“Let’s be honest, there’s no place like home. Everything they have to offer is just like being at home. The only difference is you don’t have to take care of anything, everything is taken care of for you.” He really enjoys the dining options and also mentions The Friendship Room where there is regular Tuesday night entertainment. Stamos also enjoys visiting his friends in the community, riding his scooter and whistling, as he is known to do. He summarizes his experience, “I like the area, like the place, love the people that work here.” Sharon J. Berg– known as Calli Berg– not only lives in the independent living Brooks Estates Cottages, but she is also the Board Chair. Originally from Idaho, she moved to Philadelphia for a job at the University of Pennsylvania in business administration, where she met her husband. They began their lives together in 1987, and found a place in Harvey’s Lake for weekend escapes. Berg made a connection in the United Methodist network through the owner of a lake bed and breakfast, and she has been involved ever since. She was a part of the committee on development from the first stage of the Brooks community, and says,

Be Bold. Be Fearless. Be More. Susan G Komen Greater Pennsylvania sets the tone for a September to remember. 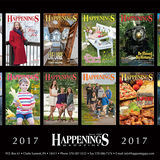