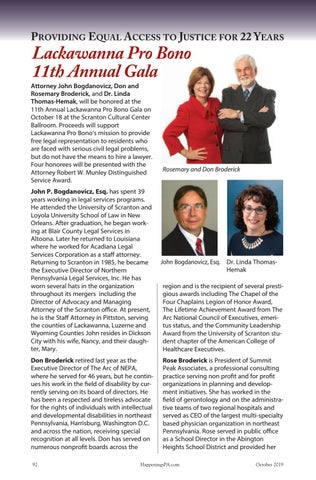 Attorney John Bogdanovicz, Don and Rosemary Broderick, and Dr. Linda Thomas-Hemak, will be honored at the 11th Annual Lackawanna Pro Bono Gala on October 18 at the Scranton Cultural Center Ballroom. Proceeds will support Lackawanna Pro Bonoâ&#x20AC;&#x2122;s mission to provide free legal representation to residents who are faced with serious civil legal problems, but do not have the means to hire a lawyer. Four honorees will be presented with the Attorney Robert W. Munley Distinguished Service Award. John P. Bogdanovicz, Esq. has spent 39 years working in legal services programs. He attended the University of Scranton and Loyola University School of Law in New Orleans. After graduation, he began working at Blair County Legal Services in Altoona. Later he returned to Louisiana where he worked for Acadiana Legal Services Corporation as a staff attorney. Returning to Scranton in 1985, he became the Executive Director of Northern Pennsylvania Legal Services, Inc. He has worn several hats in the organization throughout its mergers including the Director of Advocacy and Managing Attorney of the Scranton office. At present, he is the Staff Attorney in Pittston, serving the counties of Lackawanna, Luzerne and Wyoming Counties John resides in Dickson City with his wife, Nancy, and their daughter, Mary.

Don Broderick retired last year as the Executive Director of The Arc of NEPA, where he served for 46 years, but he continues his work in the field of disability by currently serving on its board of directors. He has been a respected and tireless advocate for the rights of individuals with intellectual and developmental disabilities in northeast Pennsylvania, Harrisburg, Washington D.C. and across the nation, receiving special recognition at all levels. Don has served on numerous nonprofit boards across the 92

John Bogdanovicz, Esq. Dr. Linda ThomasHemak region and is the recipient of several prestigious awards including The Chapel of the Four Chaplains Legion of Honor Award, The Lifetime Achievement Award from The Arc National Council of Executives, emeritus status, and the Community Leadership Award from the University of Scranton student chapter of the American College of Healthcare Executives. Rose Broderick is President of Summit Peak Associates, a professional consulting practice serving non profit and for profit organizations in planning and development initiatives. She has worked in the field of gerontology and on the administrative teams of two regional hospitals and served as CEO of the largest multi-specialty based physician organization in northeast Pennsylvania. Rose served in public office as a School Director in the Abington Heights School District and provided her

We're profiling future college graduates forging ahead in their chosen fields. October is breast cancer awareness month. We go on the road t...

We're profiling future college graduates forging ahead in their chosen fields. October is breast cancer awareness month. We go on the road t...