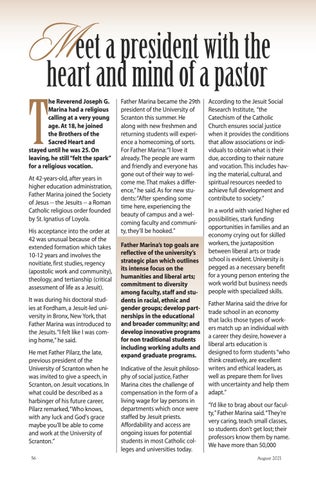 Meet a president with the heart and mind of a pastor

he Reverend Joseph G. Marina had a religious calling at a very young age. At 18, he joined the Brothers of the Sacred Heart and stayed until he was 25. On leaving, he still “felt the spark” for a religious vocation. At 42-years-old, after years in higher education administration, Father Marina joined the Society of Jesus -- the Jesuits -- a Roman Catholic religious order founded by St. Ignatius of Loyola. His acceptance into the order at 42 was unusual because of the extended formation which takes 10-12 years and involves the novitiate, first studies, regency (apostolic work and community), theology, and tertianship (critical assessment of life as a Jesuit). It was during his doctoral studies at Fordham, a Jesuit-led university in Bronx, New York, that Father Marina was introduced to the Jesuits. “I felt like I was coming home,” he said. He met Father Pilarz, the late, previous president of the University of Scranton when he was invited to give a speech, in Scranton, on Jesuit vocations. In what could be described as a harbinger of his future career, Pilarz remarked, “Who knows, with any luck and God's grace maybe you'll be able to come and work at the University of Scranton.” 56

Father Marina became the 29th president of the University of Scranton this summer. He along with new freshmen and returning students will experience a homecoming, of sorts. For Father Marina: “I love it already. The people are warm and friendly and everyone has gone out of their way to welcome me. That makes a difference,” he said. As for new students: “After spending some time here, experiencing the beauty of campus and a welcoming faculty and community, they’ll be hooked.” Father Marina’s top goals are reflective of the university’s strategic plan which outlines its intense focus on the humanities and liberal arts; commitment to diversity among faculty, staff and students in racial, ethnic and gender groups; develop partnerships in the educational and broader community; and develop innovative programs for non traditional students including working adults and expand graduate programs. Indicative of the Jesuit philosophy of social justice, Father Marina cites the challenge of compensation in the form of a living wage for lay persons in departments which once were staffed by Jesuit priests. Affordability and access are ongoing issues for potential students in most Catholic colleges and universities today.

According to the Jesuit Social Research Institute, “the Catechism of the Catholic Church ensures social justice when it provides the conditions that allow associations or individuals to obtain what is their due, according to their nature and vocation. This includes having the material, cultural, and spiritual resources needed to achieve full development and contribute to society.” In a world with varied higher ed possibilities, stark funding opportunities in families and an economy crying out for skilled workers, the juxtaposition between liberal arts or trade school is evident. University is pegged as a necessary benefit for a young person entering the work world but business needs people with specialized skills. Father Marina said the drive for trade school in an economy that lacks those types of workers match up an individual with a career they desire, however a liberal arts education is designed to form students “who think creatively, are excellent writers and ethical leaders, as well as prepare them for lives with uncertainty and help them adapt.” “I’d like to brag about our faculty,” Father Marina said. “They’re very caring, teach small classes, so students don’t get lost; their professors know them by name. We have more than 50,000 August 2021