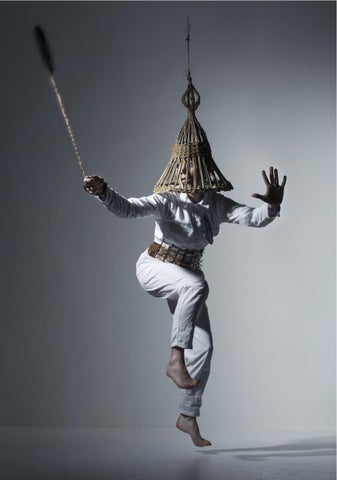 Women of the Hill Women of the Hill is a song cycle devised for High Pasture Cave, Uamh An Ard-Achaidh, on the Isle of Skye. The performance takes place in an amphitheatre-like hollow at the hidden entrance to a limestone cave-system, the site of one of the most important excavations in Scotland in recent dedicated to a matriarchal culture. Towards the end of the Iron Age the cave was sealed and forgotten until cavers stumbled upon it in the 1970s. There is no record of the cave’s original name; High Pasture refers to a summer sheiling where women brought their animals to graze. An eight-year excavation began in 2002, overseen by Martin Wildgoose, George Kozikowski, and Steven Birch. The team unearthed evidence of human activity stretching from the Mesolithic era, when the cave sheltered nomadic hunter-gatherers, to the Iron Age, when the cave functioned as a sacred site, with a white pebble path leading to the entrance. Then, after the mouth was blocked by burnt debris, a stone staircase was built. Domestic items were ritually deposited throughout the cave, including spindle whorls, antler needles, querns, and

her infant child, unborn baby, and a foetal pig placed beneath her. Her skull had been broken by a rock. Archaeologists describe how ancient funerary rites symbolised the cycles of natural the cave was sealed. With its wet vaginal caverns and votive offerings of objects associated with female crafts, High Pasture was surely matrifocal. Was the woman a priestess? Was the death of her child and possible heir the reason the cave was closed? We will never know. Bride, where there are the remains of a chapel. On St Bride’s day,

she was a saint, Bride was a Celtic goddess associated with spring, blessing the earth with fertility. Childbirth, the hearth, and crafts are sacred to her. There are many healing wells which bear her name; down the hill, by her chapel, Tobar na h-Annait, Well of Annait, may have been dedicated to an earlier incarnation of the goddess. Calendrically, Bride’s counterpart is Cailleach, the Storm Hag, dark-ruler of winter. As the creatrix, Beinn na Caillich, The Hag’s Mountain, which looms north of High Pasture and Beinn an Dubhaich, whose name is also numinous: Black Hill of Sorrow, or Dark-keening Mountain. Twice yearly, at Beltane and Samhain, Bride and Cailleach do battle. Act One of Women of the Hill their age-old argument is translated here. The inevitable defeat of Bride is echoed in the burial of the young woman in the cave. In Act Two the drama shifts from the mythic Mother-goddess of the earth to this actual Iron Age mother. Now the singers re-sound and re-imagine tradition, becoming keening women at ‘Bridget’s’ funeral, lamenting her over the threshold, ushering her spirit down the carrying stream, tomb-to-womb, life-into-death-into-life. Non-lexical utterance becomes coloured welcome Samhain, the Celtic New Year. The year dies and begins again with a toast to goddesses, our matriarch ancestors, and mothers – the women of the hill. Tuning into pre-modern sensibilities the singers’ archaeo-acoustic voices animate mnemonic topography: the land encoded in the song, the lore embedded in the land. The performance, or ritual, makes visible what was hidden, audible what was forgotten, and guides us on a journey through three worlds: Otherworld, Past, and Present. Hanna Tuulikki

The Otherworld Cailleach, Crone Goddess, Queen of Winter, awakes from her slumber in the cave at High Pasture. Standing tall, she faces Beinn an Dubhaich, The Black Hill of Sorrow, sounds her caller, and sings out to the hill.

I am Carlin deathâ&#x20AC;&#x2122;s-ward my right hand spells thunder whirring time around my head into the twofold threshold I am a transceiver winter blue

can you hear my new year re-rite-ing? I call you out Bridget from the spring face me I will take you down The land responds to Cailleach’s call: Bride, Mother Goddess, Queen of Summer, emerges from the hill and traces the course of the underwater burn with her steps. Cailleach and Bride battle for sovereignty.

I hear you this old transmission I’m tuning in

dead-ringer in the song

Spindleshanks! your green’s envy be careful now missy or I’ll lose you your thread! bride:

through the eye of my whorl – see the barley grow the trout leap the calf suck his mammy’s teat cailleach:

you callow babe what child’s play! I loom over you you reign in my shadow born and

have you forgotten? from wet lungs released from my womb

into my limestone tomb your song is dead First Beloved you become the bridge I take my pride of place The Queen Under The Hill Defeated, Bride withdraws. Cailleach walks towards the red hills, Beinn na Caillich, The Hag’s Mountain, to take her seat.

Iron Age Burial of a woman are laid out on the platform. Keening women sing a lament.

keen over our relics

The body of the woman, ‘Bridget’, is adorned with a spindle threaded with holly berries, a water lily earring, a red campion wreath, and a willow blanket.

Today The performers sing in remembrance of Cailleach, Bride, and Bridget, and celebrate the transition between the seasons.

Spindle whorl: spindle weight; symbolic of time and frequently found in burials. It was said that if you look through a spindle whorl you see into the past or future. Spinning’s traditional association with women’s work is the origin of the terms distaff: the female side of the family; spindleshanks: long legs (derogatory); spinster: an unmarried old woman (derogatory). Quern stone: shaped bed and rounded rubbing stone. In a funerary context the transformation of grain symbolised the cycle of life, death, and regeneration. Tobar na h-Annait, Well of Annait: the well and standing stone Clach na h-Annait, Stone of Annait, may have been sacred to a water-goddess, Annait, or Anaitis, which some relate to the Irish goddess Danu or Anu. Flyting: poetic exchange of insults, with a rich tradition in Scotland. Carlin: Scots for Cailleach, old woman, or witch. Keening: vocal lament; musical wailing in funeral music around the world. Until relatively recently the custom was still practiced in Gaelic Scotland; the role had its own title, ‘Bean Tuirim’, mourning woman. ma, mam, mama: maa: earth, land, in Finnish; ama: mum, in Basque; mamma: milk secreting organ of female mammals; ma’am: term of respect used for female royalty; mater: Bridget, Brigit, Brigid, Brighid, Brìghde, Brìde: saint and goddess. mem-oral: portmanteau word; mem, thirteenth letter of the Semitic abjads, believed to be derived from the Egyptian hieroglyph for water, origin of the letter ‘m’; oral, spoken word. Mummer, guiser: actor in traditional mimed plays performed at Halloween, Hogmanay and Christmas. Slàinte Mhath: good health, toast in Gaelic.

artists and writers who have referred to the site include Caroline Dear, Alec Finlay, Janet Paisley, John Purser, Gill Russell, and Norman Shaw.

Thanks to Alec Finlay, Maoilios Caimbeul, James Horner, Jamilah Michel, Johannes Sailer (Edinburgh Sculpture Workshop), Ainslie Roddick (CCA Glasgow), Minty Donald (University of Glasgow) and Whitewave: Skye’s Outdoor Centre. Special thanks to Martin Wildgoose and George Kozikowski for their archaeological knowledge and enthusiasm, to Norman Stoddart of Kilbride House for use of the land, and to the volunteer stewards.

Emma Nicolson: director and curator Rosie Somerville: project management Gayle Meikle: project management presenting innovative and ambitious contemporary arts projects. An organisation ‘without walls’, it collaborates with artists, curators, writers and the public to create work in response to the unique qualities of this region, its environment, its culture and its people. The commission is funded by Creative Scotland with additional support from CCA, Glasgow, and Theatre, Performance and Television Studies Department, University of Glasgow. Initial research was supported by a Creative Scotland Artist Bursary for Tuulikki’s exploration of Mnemonic Topographies. Women of the Hill programme

Hanna Tuulikki's 'Women of the Hill' is a song-cycle for three female performers, responding to the archaeology and topography of High Pastu...

Women of the Hill programme

Hanna Tuulikki's 'Women of the Hill' is a song-cycle for three female performers, responding to the archaeology and topography of High Pastu...