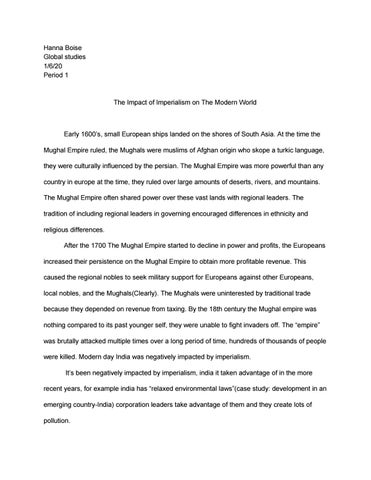 The Impact of Imperialism on The Modern World

Early 1600’s, small European ships landed on the shores of South Asia. At the time the Mughal Empire ruled, the Mughals were muslims of Afghan origin who skope a turkic language, they were culturally influenced by the persian. The Mughal Empire was more powerful than any country in europe at the time, they ruled over large amounts of deserts, rivers, and mountains. The Mughal Empire often shared power over these vast lands with regional leaders. The tradition of including regional leaders in governing encouraged differences in ethnicity and religious differences. After the 1700 The Mughal Empire started to decline in power and profits, the Europeans increased their persistence on the Mughal Empire to obtain more profitable revenue. This caused the regional nobles to seek military support for Europeans against other Europeans, local nobles, and the Mughals(Clearly). The Mughals were uninterested by traditional trade because they depended on revenue from taxing. By the 18th century the Mughal empire was nothing compared to its past younger self, they were unable to fight invaders off. The “empire” was brutally attacked multiple times over a long period of time, hundreds of thousands of people were killed. Modern day India was negatively impacted by imperialism. It’s been negatively impacted by imperialism, india it taken advantage of in the more recent years, for example india has “relaxed environmental laws”(case study: development in an emerging country-India) corporation leaders take advantage of them and they create lots of pollution.

India has one of the fastest growing economies in the world, but at the same time its economy is very unequal. The rich getting richer every day in india, and the poor stay the same. The poor struggling to find education, good healthcare, and to make minimum wage. This is all because of the uneven development in the economy, some places have better access to links to trade routes from the past. Even though they have one of the fastest growing economies they still have all theses people that are in poverty. India rarely taxes its wealthiest citizens, and healthcare is very highly promoted in India and it is very expensive, to most healthcare is a luxury that canâ&#x20AC;&#x2122;t afford it, which is most of India. 10% of India has 77% of the total wealth(case study: development in an emerging country-India). So as most of India could not afford healthcare the mortality rate for the poorest states is high then those in sub-Sahara Africa. The british came to india and took everything they had, when they finally became independent they still were in poverty, they were still poor and even though it was a good thing when they became independent they still were in such a bad state of poverty. The Mughal Empire was a very successful empire until about the 18th century when the british took lead over india and took advantage of the coastal area, it was a very unguarded area. India's history as the Mughal empire being overthrown and the separation of cultures led India to have an unequal economy in the modern day. One may say that it's the world's third largest economy and that in the last five years of the economy the citizens to be exact 90 million have escaped poverty and increased the overall quality of their lives do to the fast economic growth. In the past few years india has reached an all low to the poverty levels. The impact of imperialism on the modern world

The impact of imperialism on the modern world