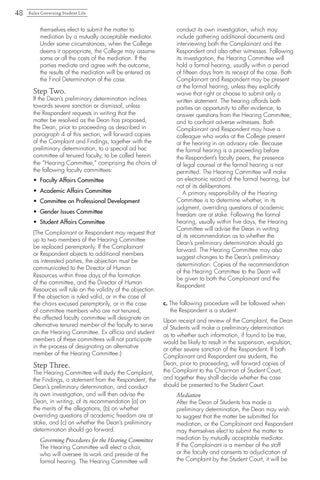 themselves elect to submit the matter to mediation by a mutually acceptable mediator. Under some circumstances, when the College deems it appropriate, the College may assume some or all the costs of the mediation. If the parties mediate and agree with the outcome, the results of the mediation will be entered as the Final Determination of the case.

If the Dean’s preliminary determination inclines towards severe sanction or dismissal, unless the Respondent requests in writing that the matter be resolved as the Dean has proposed, the Dean, prior to proceeding as described in paragraph 4 of this section, will forward copies of the Complaint and Findings, together with the preliminary determination, to a special ad hoc committee of tenured faculty, to be called herein the “Hearing Committee,” comprising the chairs of the following faculty committees: • Faculty Affairs Committee • Academic Affairs Committee • Committee on Professional Development • Gender Issues Committee • Student Affairs Committee (The Complainant or Respondent may request that up to two members of the Hearing Committee be replaced peremptorily. If the Complainant or Respondent objects to additional members as interested parties, the objection must be communicated to the Director of Human Resources within three days of the formation of the committee, and the Director of Human Resources will rule on the validity of the objection. If the objection is ruled valid, or in the case of the chairs excused peremptorily, or in the case of committee members who are not tenured, the affected faculty committee will designate an alternative tenured member of the faculty to serve on the Hearing Committee. Ex officio and student members of these committees will not participate in the process of designating an alternative member of the Hearing Committee.) 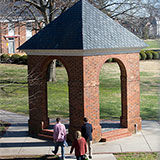