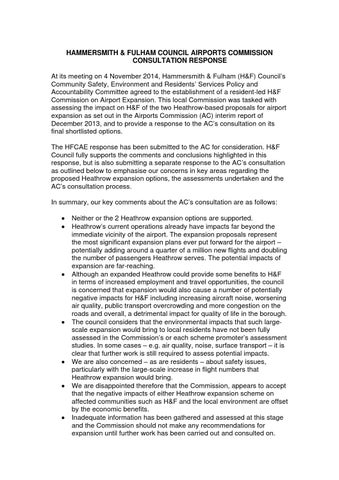 HAMMERSMITH & FULHAM COUNCIL AIRPORTS COMMISSION CONSULTATION RESPONSE At its meeting on 4 November 2014, Hammersmith & Fulham (H&F) Council’s Community Safety, Environment and Residents’ Services Policy and Accountability Committee agreed to the establishment of a resident-led H&F Commission on Airport Expansion. This local Commission was tasked with assessing the impact on H&F of the two Heathrow-based proposals for airport expansion as set out in the Airports Commission (AC) interim report of December 2013, and to provide a response to the AC’s consultation on its final shortlisted options. The HFCAE response has been submitted to the AC for consideration. H&F Council fully supports the comments and conclusions highlighted in this response, but is also submitting a separate response to the AC’s consultation as outlined below to emphasise our concerns in key areas regarding the proposed Heathrow expansion options, the assessments undertaken and the AC’s consultation process. In summary, our key comments about the AC’s consultation are as follows: • •

Neither or the 2 Heathrow expansion options are supported. Heathrow’s current operations already have impacts far beyond the immediate vicinity of the airport. The expansion proposals represent the most significant expansion plans ever put forward for the airport – potentially adding around a quarter of a million new flights and doubling the number of passengers Heathrow serves. The potential impacts of expansion are far-reaching. Although an expanded Heathrow could provide some benefits to H&F in terms of increased employment and travel opportunities, the council is concerned that expansion would also cause a number of potentially negative impacts for H&F including increasing aircraft noise, worsening air quality, public transport overcrowding and more congestion on the roads and overall, a detrimental impact for quality of life in the borough. The council considers that the environmental impacts that such largescale expansion would bring to local residents have not been fully assessed in the Commission’s or each scheme promoter’s assessment studies. In some cases – e.g. air quality, noise, surface transport – it is clear that further work is still required to assess potential impacts. We are also concerned – as are residents – about safety issues, particularly with the large-scale increase in flight numbers that Heathrow expansion would bring. We are disappointed therefore that the Commission, appears to accept that the negative impacts of either Heathrow expansion scheme on affected communities such as H&F and the local environment are offset by the economic benefits. Inadequate information has been gathered and assessed at this stage and the Commission should not make any recommendations for expansion until further work has been carried out and consulted on. 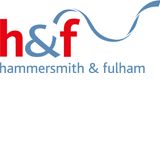