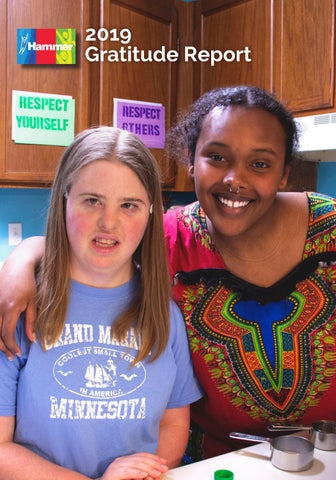 Dear Friend of Hammer In a world that increasingly values speed and efficiency, the work we do at Hammer is much â&#x20AC;&#x153;slowerâ&#x20AC;?. While we work hard to be efficient in our business practices, the care we provide is deliberate and careful. The core of our mission is to build relationships with the people we support and to walk beside them providing hope and encouragement along the way. These relationships extend also to family members, employees, and supporters. We care deeply about all the people involved in our work. This annual report demonstrates what a great year we had in 2019. We had increased financial support, new relationships, more volunteer hours and engaged employees. The circle of support widened once again. We are so grateful. Your volunteer hours enriched the lives of those we support. Your increased financial support allowed us to give every employee at Hammer a long overdue raise in 2019. Thank you. It also allowed us to deepen our supports and invest in the lives of those we support. Again, we are so grateful. It is amazing what we can do together. Please know that we are thankful for your continued support. Blessings,

Hammer was able to support  individuals with developmental disabilities and help them live full and meaningful lives.

Here's what your gifts YOUR IMPACT ON INDIVIDUALS WE SERVE Medical Care and Dental Care for Individuals Your generous donations in 2019 helped individuals needing additional medical support as they age. $ Thanks to you an additional 60,000 was available for dental procedures not covered by insurance.

Home Improvements Your donations provided safe and accessible homes for the 279 individuals who call Hammer home. In 2019 we were able to complete more than 55 home improvement projects. `

made possible in 2019 YOUR IMPACT ON STAFF MEMBERS

Employee Emergency Fund 120 caregivers received a total of $56,780 in car repairs so they could get to work and support the individuals who count on them each day.  `

Education Grants This year 20 education grants totaling $ 47,000 were awarded to Hammer employees as they work to finish undergraduate and master’s programs. `

Educating Our Nurses Your gift to the Education Grant fund helped Nurse Brandi earn her associate’s degree and she is now a licensed Registered Nurse. `

Hammer Travel There were 277 travelers who went on vacation with Hammer Travel in 2019, for an average of 9.2 travelers per trip. A total of 16 volunteers filled 35 staffing requests on trips, equaling 3,666 hours. `

Top Workplace Award Again in 2019, Hammer was named a Top Workplace for the 10thâ&#x20AC;Żyear in a row! Thanks to your generosity, supporting employee benefits and training, Hammer is a positive place to work.

Thank You to our Fabulous Donors

My parents taught us that all people matter, to treat people as you’d like to be treated and that Mickey deserves to live a full life just like everyone else. They are a hard act to follow, but I think they’d be really happy to see how the next generation has carried on. Mickey leads a happy life at Hammer, pursuing the things he loves and enjoys.” — Julie Wesley-Wong, Mickey’s sister 9

“Going to work every day knowing that I am making a difference in these individual’s lives is one of the most rewarding feelings I’ve ever had. I’m glad I have this opportunity to help individuals live their lives to the fullest.” —Craig Raymond, Zealand Program Manager

Chris and Vance are best of friends, as well as house mates. They bond over their love of video games and sports, cheering each other on along the way. Their personalities mesh well together, as both are young at heart, and they enjoy being active in the community. Thank you for making this active, and fun, life possible. 11

BLUE = Thank you to our monthly donors. Your gift makes a difference every day. ď&#x192;Ş = Your business has been uniquely generous through employee matching gifts. Thank You. + = Donors who have passed

Thank you to our Hammer Employees Thank you for all you do for those we serve and your investment in Hammer’s mission. Hammer caregivers make contributions every day, supporting individuals with everything from basic needs to new-found independence. Employees have the opportunity to make contributions through payroll deductions and other gifts to a fund of their choice. In 2019, 87 employees donated more than $17,000.

Since 1978, when he was just 10 years old, Andy has called Hammer his home. From the time he was an active boy who loved to swim and camp, to now, an older adult who enjoys cooking, making art, and watching movies at his group home, Hammer caregivers have been by his side supporting Andy’s dreams. Your gitft make this wonderful life possible for Andy. Thank you.

Legacy Investors Your planned gift is a demonstration of your belief in Hammer. Thank you for your investment, planning, and preparing for our future. Individuals served at Hammer will have good services far into the future, because of you. Thank you for your Legacy Gift. Anonymous (7) Leonard + and Mary + Aase Lisa M. Anderson Margaret + and James + Argall Steven Argall Trust Lisbeth and Mark Armstrong Dorothy A. Bailey + Leigh Bailey and Freda Marver Angela and George Bernhardt Rae + and Albin + Carlson Rae Carlson + Trust Gerald M. Caruso, Jr. Richard and Judith Corson Carol A. Curoe Judith and Kent Davidson Lisa and Scott Dongoske John Estrem Marvin and Rosemary Fish

“Friendly and engaging, sweet, kind and sassy, Kelly is a remarkable woman. She needs constant supports and supervision to live her life safely, with dignity and respect. You can’t believe how happy we are to know that Kelly is part of such a caring and committed community.” —Jeff and Sue Lambert, Kelly’s parents

“Julie and I believe in financially supporting Hammer in a multitude of ways. Our son Aaron came to live with Hammer when he was 13 years old. It was a very difficult time for our family and Hammer was instrumental in helping Aaron and our family adjust. Over the ensuing 12 years Aaron has grown and matured in ways we could scarcely hope for; and this has been due to the care, guidance, and dedication of Hammer and its staff. In this day and time, when the funding of Hammer programs and many other services our loved ones need are, at best, falling to keep up with ever rising costs and at worst constantly under the threat of cuts, we feel that it is our duty and

responsible to assist Hammer in any way we are able.”

Your lifetime giving is an investment in so many lives. We celebrate the chance to share our gratitude with you, who have given so much. Thank you. Evelyn Carlson Society