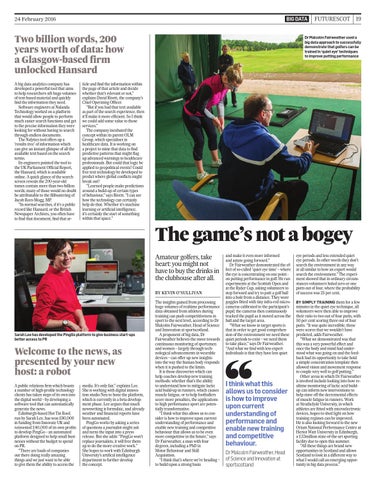 Two billion words, 200 years worth of data: how a Glasgow-based firm unlocked Hansard A big data analytics company has developed a powerful tool that aims to help researchers sift huge volumes of text-based material and quickly find the information they need. Software engineers at Nalanda Technology worked on a platform that would allow people to perform much easier search functions and get to the precise information they were looking for without having to search through endless documents. The Nalytics tool offers up a ‘results tree’ of information which can give an instant glimpse of all the available text based on the search terms. Its engineers pointed the tool to the UK Parliament Official Report, the Hansard, which is available online. A quick glance of the search screen reveals the 200-year-old tomes contain more than two billion words; many of those would no doubt be attributable to the filibustering of Jacob Rees-Mogg, MP. “In normal searches, if it’s a public record like Hansard, or the British Newspaper Archives, you often have to find that document, find that ar-

ticle and find the information within the page of that article and decide whether that’s relevant or not,” explains David Rivett, the company’s Chief Operating Officer. “But if you had that text available as part of the search experience, then it’ll make it more efficient. So I think we could add some value to those services.” The company incubated the concept within its parent OLM Group, which specialises in healthcare data. It is working on a project to mine that data to find predictive patterns that might flag up advanced warnings to healthcare professionals. But could that logic be applied to geopolitical events? Could free text technology be developed to predict where global conflicts might break out? “Learned people make predictions around a build-up of certain types of behaviour,” says Rivett. “I can see how the technology can certainly help do that. Whether it’s machine learning or artificial intelligence, it’s certainly the start of something within that space.”

The game’s not a bogey Amateur golfers, take heart: you might not have to buy the drinks in the clubhouse after all. By Kevin O’Sullivan

Welcome to the news, as presented by your new host: a robot A public relations firm which boasts a number of high-profile technology clients has taken steps of its own into the digital world – by developing a software tool that can automatically generate the news. Edinburgh-based Hot Tin Roof, run by Sarah Lee, has won £80,000 in funding from Innovate UK and reinvested £40,000 of its own profits to develop PingGo – an automated platform designed to help small businesses without the budget to spend on PR. “There are loads of companies out there doing really amazing things and we just want to be able to give them the ability to access the

media. It’s only fair,” explains Lee. She is working with digital innovation studio Neu to hone the platform, which is currently in a beta development phase. Lee argues that much newswriting is formulaic, and already weather and financial reports have been automated. PingGo works by asking a series of questions a journalist might ask and turns the input into a press release. But she adds: “PingGo won’t replace journalists, it will free them up to do the more creative work.” She hopes to work with Edinburgh University’s artifical intelligence department to further develop the concept.

The insights gained from processing huge volumes of realtime performance data obtained from athletes during training can push competitiveness in sport to the next level, according to Dr Malcolm Fairweather, Head of Science and Innovation at sportscotland. A proponent of big data, Dr Fairweather believes the move towards continuous monitoring of sportsmen and women – largely through technological advancements in wearable devices – can offer up new insights into the way the human body responds when it is pushed to the limits. It is those discoveries which can help coaches develop new training methods: whether that’s the ability to understand how to mitigate lactic acid build-up in runners, which causes muscle fatigue, or to help footballers score more penalties, the applications to high performance sport are potentially transformative. “I think what this allows us to consider is how to improve upon current understanding of performance and enable new training and competitive behaviour that allows us to be even more competitive in the future,” says Dr Fairweather, a man with four degrees, including a PhD in Motor Behaviour and Skill Acquisition. “I think that’s where we’re heading – to build upon a strong basis

and make it even more informed and astute going forward.” Dr Fairweather demonstrated the effect of so-called ‘quiet eye time’ – where the eye is concentrating on one point on putting performance in golf. He ran experiments at the Scottish Open and at the Ryder Cup, asking volunteers to step forward and try to putt a golf ball into a hole from a distance. They wore goggles fitted with tiny infra-red microcameras calibrated to the participant’s pupil; the cameras then continuously tracked the pupil as it moved across the ball and the target area. “What we know in target sports is that in order to get good comprehension of the environment we need these quiet periods to exist – we need them to take place,” says Dr Fairweather. “And what we find with less expert individuals is that they have less quiet

I think what this allows us to consider is how to improve upon current understanding of performance and enable new training and competitive behaviour. Dr Malcolm Fairweather, Head of Science and Innovation at sportscotland

eye periods and less extended quiet eye periods. In other words they don’t search the environment in any way at all similar to how an expert would search the environment.” The experiment showed that in ordinary circumstances volunteers holed zero or one putts out of four, where the probability of success was 25 per cent. By simply training them for a few minutes in the quiet eye technique, all volunteers were then able to improve their ratio to two out of four putts, with 50 per cent scoring three out of four putts. “It was quite incredible, these were scores that we wouldn’t have predicted, adds Fairweather. “What we demonstrated was that this was a very powerful effect and once the body and mind had understood what was going on and the feedback had its opportunity to take hold a simple concentration template then allowed vision and movement response to couple very well to golf putting.” Other areas in which Dr Fairweather is involved include looking into how realtime monitoring of lactic acid buildup can inform new interventions to help stave off the decremental effects of muscle fatigue in runners. Work at Strathclyde University, in which athletes are fitted with microelectronic devices, hopes to shed light on how training regimes can be improved. He is also looking forward to the new Oriam National Performance Centre at Heriot Watt University in Edinburgh, a £33million state-of-the-art sporting facility due to open this summer. “All these things are brand new opportunities in Scotland and allows Scotland to look in a different way to what I would call an emerging opportunity in big data process.” Futurescot an independent publication distributed with The Times Scotland

Futurescot an independent publication distributed with The Times Scotland