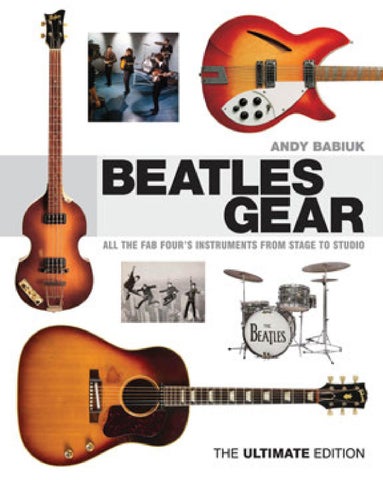 An Imprint of Hal Leonard Corporation

IN THE BEGINNING THERE WAS SKIFFLE 11

THE CAVERN AND FIRST RECORDINGS 69

SMARTENING UP THE ACT 95

THE MAKINGS OF BEATLEMANIA 127

STORMING THE STATES, AND MAKING MOVIES 181

The Ludwig drum company, based in Chicago, Illinois, has built drums for more than a hundred years, and this catalogue showed their wares for 1962. Ringo ordered a kit like the Downbeat pictured, with similar sizes (20-inch bass-drum, 12inch tom, 14-inch floor tom) but with a rare 51⁄2 by 14-inch Jazz Festival snare drum.

Ringo Starr’s 1963 Ludwig Downbeat. This is Ringo’s first oyster black pearl Ludwig Downbeat drum set that he got in 1963 and used live and on recordings with The Beatles.

Ringo used this rare 51⁄2 x 14 Ludwig Jazz Festival snare drum (most were 5 x 14) for virtually every live show and recording from this time on. The drum has a manufacturing date stamped inside of April 18 1963.

Live in Australia. The group have swivel-style stands for their Vox amps and Ringo his new 22-inchbass Ludwig kit.

FACING PAGE: Paul and George make sure their guitars are in tune before they go on stage.

Known Better’ (5222); on July 20 ‘I’ll Cry Instead’ backed with ‘I’m Happy Just To Dance With You’ (5234) and on the same day ‘And I Love Her’ backed with ‘If I Fell’ (5235); and on August 24 ‘Slow Down’ backed with ‘Matchbox’ (5327). McCartney had arranged for extensive work to be done to his original ’61 Hofner bass while he was away on tour playing his newer ’63 model. “Sound City has some very distinctive guitars within its walls at the moment,” ran a contemporary news report. “One is Paul McCartney’s very first violin bass, another is George’s first Gretsch, and the third is John Lennon’s second Rickenbacker guitar – but they’re not for sale. ‘The boys wouldn’t part with them for anything,’ said [store manager Bob Adams]. ‘They’re just in for overhauls.’”52 Adams now recalls the work done back then to McCartney’s bass.

mounting system, like the instrument pictured that has been restored to look almost identical to Paul’s.

The Beatles performing ‘Eight Days A Week’, ‘Yes It Is’, and ‘Ticket To Ride’ on Thank Your Lucky Stars, filmed on March 28.

FACING PAGE TOP: A camera rehearsal for the opening sequence in the film Help!. FACING PAGE BELOW: The Beatles film a sequence for ‘I Need You’ and ‘The Night Before’ on location on Salisbury Plain.

More TV appearances and recording sessions were slipped between film work. On April 10, the group appeared on the BBC TV chart show Top Of The Pops performing ‘Ticket To Ride’ and ‘Yes It Is’. The following day, they again played at the Empire Pool, Wembley, for the New Musical Express 1964-65 Annual Poll-Winners’ All-Star Concert, where they performed ‘I Feel Fine’, ‘She’s A Woman’, ‘Baby’s In Black’, ‘Ticket To Ride’, and ‘Long Tall Sally’. Harrison played his Gretsch Tennessean with his Country Gentleman as a spare, while Lennon used his Rickenbacker 325 with his ’64 Gibson J-160E as backup. Both guitarists played through their Vox A.C.100 amplifiers. McCartney played his ’63 Hofner bass through his A.C.100 bass rig, and Starr used his 22-inchbass Ludwig kit.

The original label for Capitol’s American release of the ‘Ticket To Ride’ single boasted, rather prematurely, that the track was from the forthcoming film Eight Arms To Hold You – the working title for what soon became Help!.

FINISHING THE HELP! SESSIONS With the title of the new film established, Lennon and McCartney had to compose a title song. They did so quickly and brilliantly. On April 13, the group found time in their shooting schedule to hop into Abbey Road and work on ‘Help!’. It was completed the same day. A bootleg that unveiled the building of the track in the studio revealed that Lennon played the Framus Hootenanny 12-string for the song’s acoustic rhythm part. While filming progressed, back at Abbey Road producer George Martin completed final mixes of the songs needed for the movie. The group were filmed in further performance sequences, including one of the highlights, the superb opening scene with the group playing ‘Help!’. The black-and-white scene shows Harrison using his Gretsch Tennessean, McCartney his ’63 Hofner bass, Starr on his 22-inch-bass Ludwig kit with the number-four drop-T logo drum-head, and Lennon playing Harrison’s Gibson J-160E.

Chet Atkins signature series, which also included the Country Gentleman and the Tennessean. The guitar sold for a considerable sum at auction in 2015.

John pictured in April 1966 at the ‘Paperback Writer’ session at Abbey Road playing his Gretsch 6120. In the foreground is a Vox

7120 amp, with its tubes (and accompanying glass of wine) clearly visible.

Notice how the wood grain pattern on the headstock matches that of the guitar seen in the photo of John with his Gretsch.

The serial number stamped on the top of the headstock of John’s Gretsch, 53940, dates its manufacture to 1964.

Paul plays his Hofner bass in front of a couple of Vox Super Beatle amps and Ringo lays down the rhythm at Shea Stadium on August 23 1966. At the end of the ’66 US tour, John went to Spain to star in the film How I Won The War. Pictured is a poster for the film and the cover of the DVD that was issued years later.

he had to rent them a house to stay in while they were in LA and outfit it with a pool table and stuff like that. So when The Beatles were done with the tour and about to leave, my dad said to them: ‘My son’s a musician, do you think I could have that little amp to give to him?’ And they told him sure. And that’s how I got it.”30 The Gerber family still has the Vox amp to this day. The Beatles would use various small Vox practice amps while touring in the USA – including the A.C.4, the Cambridge Reverb, and the Pacemaker – and Gerber’s was a Vox Pathfinder. The following day not only marked the last gig of the group’s American tour but The Beatles’ final public concert. Touring had taken its toll. As a band they were commercially and financially successful, without doubt, but the negative pressures of touring were making it less and less desirable to travel around playing live. After all, no one could hear much of the performances anyway. The band figured it would be much easier and far more constructive to work on studio recordings. At least that way people would be able to listen to and hear their music. With all this in mind, and without anyone else knowing, The Beatles decided privately never to perform live again after the show on Monday August 29 at San Francisco’s Candlestick Park stadium. This concert marked the end of an era. Beatlemania was all but dead.

1969-1970 George Harrison’s 1968 Fender Rosewood Telecaster. The guitar was custom-made for George by Fender, and later George gave it to Delaney Bramlett. George used it on Beatles recordings in ’69, including the group’s final live performance on the Apple roof-top. The Rosewood Telecaster is owned today by George’s estate. To see this Fender Telecaster guitar in detail and in a 360degree view, download The Guitar Collection: George Harrison, an app that brings George’s instruments to life.

Stratocaster to the line, and they decided that a good way to publicise them would be to give a prototype of the Tele to George Harrison and of the Strat to Jimi Hendrix. “In the autumn of 1968, Roger Rossmeisl told me we would be making these two special guitars,” Kubicki recalls. “For me this was about as exciting as things could get. The Beatles and Hendrix were at their peak and were a big part of the times.” Rossmeisl decided that a safe course would be to produce two prototypes each of the Rosewood Telecaster and Rosewood Stratocaster and then select the best of each to give to the star musicians. The bodies for the guitars were made with a thin layer of maple sandwiched between a solid rosewood top and back. “I spent hours sanding the bodies to perfection,” a misty-eyed Kubicki recalls. “Eventually, a clear polyurethane finish was applied and allowed to dry, and we selected the two best bodies and necks for Harrison and Hendrix.” Kubicki says that Harrison’s Telecaster became a priority, because Fender knew it was required for an album that The Beatles were working on. “George’s guitar was to have a particular hand-done satin finish,” he remembers. “To achieve this, the body and neck were hard-block sanded with 500-grit paper, following the grain, until the surface was smooth, flat, and fine. Then the surface was carefully rubbed with a fine cloth until it became highlighted. The guitar was set up, checked, and rechecked to Roger’s satisfaction, placed in a black hardshell case, and delivered to marketing. I never saw the guitar again – not in person, at least.” The second body and neck were stored in Fender’s R&D department.

Kubicki has since documented the story of the guitar precisely, and he reports that Harrison’s guitar was flown to England – in its own seat – accompanied by a courier, and the instrument was hand-delivered to the Apple offices in December 1968. “I remember when I saw the guitar for the first time in the Let It Be film,” Kubicki says with a smile. “I was so thrilled I almost jumped out of my seat.”14 The Hendrix Rosewood Stratocaster would not be completed until about April 1970, but for some reason it was never sent to the guitarist – who died that August. Kubicki has no idea what happened to that instrument. A myth circulated for years insisting that Harrison and Lennon each received a Rosewood Telecaster, but Lennon certainly never had one. Harrison’s Fender Rosewood Telecaster bore serial A revised and expanded edition of the best selling Beatles guide-from the author of Rolling Stones Gear.

A revised and expanded edition of the best selling Beatles guide-from the author of Rolling Stones Gear.