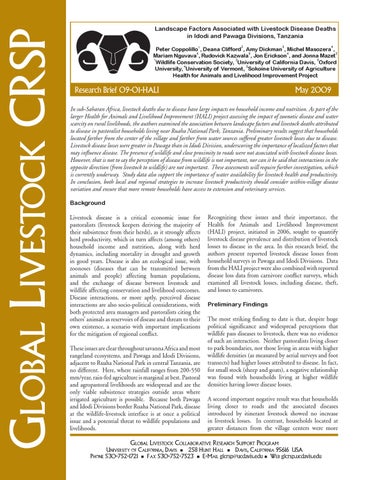 In sub-Saharan Africa, livestock deaths due to disease have large impacts on household income and nutrition. As part of the larger Health for Animals and Livelihood Improvement (HALI) project assessing the impact of zoonotic disease and water scarcity on rural livelihoods, the authors examined the association between landscape factors and livestock deaths attributed to disease in pastoralist households living near Ruaha National Park, Tanzania. Preliminary results suggest that households located farther from the center of the village and farther from water sources suffered greater livestock losses due to disease. Livestock disease losses were greater in Pawaga than in Idodi Division, underscoring the importance of localized factors that may influence disease. The presence of wildlife and close proximity to roads were not associated with livestock disease losses. However, that is not to say the perception of disease from wildlife is not important, nor can it be said that interactions in the opposite direction (from livestock to wildlife) are not important. These assessments will require further investigation, which is currently underway. Study data also support the importance of water availability for livestock health and productivity. In conclusion, both local and regional strategies to increase livestock productivity should consider within-village disease variation and ensure that more remote households have access to extension and veterinary services. Background Livestock disease is a critical economic issue for pastoralists (livestock keepers deriving the majority of their subsistence from their herds), as it strongly affects herd productivity, which in turn affects (among others) household income and nutrition, along with herd dynamics, including mortality in drought and growth in good years. Disease is also an ecological issue, with zoonoses (diseases that can be transmitted between animals and people) affecting human populations, and the exchange of disease between livestock and wildlife affecting conservation and livelihood outcomes. Disease interactions, or more aptly, perceived disease interactions are also socio-political considerations, with both protected area managers and pastoralists citing the othersâ&#x20AC;&#x2122; animals as reservoirs of disease and threats to their own existence, a scenario with important implications for the mitigation of regional conflict. These issues are clear throughout savanna Africa and most rangeland ecosystems, and Pawaga and Idodi Divisions, adjacent to Ruaha National Park in central Tanzania, are no different. Here, where rainfall ranges from 200-550 mm/year, rain-fed agriculture is marginal at best. Pastoral and agropastoral livelihoods are widespread and are the only viable subsistence strategies outside areas where irrigated agriculture is possible. Because both Pawaga and Idodi Divisions border Ruaha National Park, disease at the wildlife-livestock interface is at once a political issue and a potential threat to wildlife populations and livelihoods.

Recognizing these issues and their importance, the Health for Animals and Livelihood Improvement (HALI) project, initiated in 2006, sought to quantify livestock disease prevalence and distribution of livestock losses to disease in the area. In this research brief, the authors present reported livestock disease losses from household surveys in Pawaga and Idodi Divisions. Data from the HALI project were also combined with reported disease loss data from carnivore conflict surveys, which examined all livestock losses, including disease, theft, and losses to carnivores. Preliminary Findings The most striking finding to date is that, despite huge political significance and widespread perceptions that wildlife pass diseases to livestock, there was no evidence of such an interaction. Neither pastoralists living closer to park boundaries, nor those living in areas with higher wildlife densities (as measured by aerial surveys and foot transects) had higher losses attributed to disease. In fact, for small stock (sheep and goats), a negative relationship was found with households living at higher wildlife densities having lower disease losses. A second important negative result was that households living closer to roads and the associated diseases introduced by itinerant livestock showed no increase in livestock losses. In contrast, households located at greater distances from the village centers were more

likely to suffer greater losses of both cattle and small stock, suggesting that limited access to veterinary supplies and livestock extension may exacerbate livestock losses. Information may also be limiting, as those living farther from villages may be less aware of disease outbreaks and consequently less able to vaccinate or treat stock sooner. Households living farther from surface water also reported more losses. This may reflect poorer water sources (with greater contamination, higher densities of use), or the effects of increased nutritional stress on livestock from having to walk herds farther, or less frequent watering. The final important result was the marked differences between Idodi and Pawaga Divisions themselves. Losses for all stock

were greater in Pawaga Division, possibly reflecting the areaâ&#x20AC;&#x2122;s dryness (there is a west to east rainfall gradient), or the effects of the 2007 Rift Valley Fever outbreak in small ruminants (though cattle losses were higher in Pawaga as well). Practical Implications A number of practical issues arise from these preliminary results. First, the relationship between disease losses and distance to village centers suggests that access to veterinary care, markets for veterinary supplies, and information on livestock husbandry may be important factors in mitigating disease losses. Both local and regional strategies

Cheetah keep a close eye on cattle escorted by Maasai herders. The HALI project is investigating disease transmission in this landscape, where livestock, humans, and wildlife share critical resources and often come into close contact. Photo by Jonna Mazet.

to increase livestock productivity should consider withinvillage variation and ensure that more remote households have access to extension and veterinary services. Exposure to wildlife was not an important factor driving livestock disease losses in sampled households. However, that is not to say the perception of disease from wildlife is not important, nor can it be said that interactions in the opposite direction (from livestock to wildlife) are not important. Additionally, diseases transmitted between wildlife and livestock that result in illness or decreased production, but not necessarily death of the animal, may be overlooked when assessing deaths due to disease. This assessment will require more wildlife sampling, which the

HALI project has already begun in collaboration with the Tanzanian National Parks. It is also conceivable that a wildlife reservoir spreads disease evenly across the whole study area, so comparisons with other livestock producing areas lacking wildlife may be useful. The data also revealed significant spatial differences between the two divisions. The differences are not wholly attributable to the Rift Valley Fever outbreak in 2007 (which was more severe in Pawaga), and it is not clear whether the same pattern will persist through time. It is clear however, that livestock extension and veterinary interventions should be keenly aware of local variation in disease losses and target their efforts accordingly.

Maasai herders and their livestock pass by a herd of Zebra. Extensive grazing is critical to livestock nutrition and livelihoods in pastoral management systems, and often brings herders, their households, livestock and wildlife into close proximity as resources like water and pasture are shared. This proximity increases the potential for the transmission of zoonotic diseases like tuberculosis. Photo by Jonna Mazet.

About the Authors: Dr. Peter Coppolillo is an Associate Conservation Ecologist and former director of the Ruaha Landscape Program for the Wildlife Conservation Society (WCS). He is currently coordinator for the WCS Yellowstone Program. Email: PCoppolillo@WCS.org. Dr. Deana Clifford is the HALI Project Coordinator and postdoctoral researcher at the Wildlife Health Center in the School of Veterinary Medicine, University of California, Davis. Email: dlclifford@ucdavis.edu. Amy Dickman is the Kaplan Senior Research Fellow in Wild Cat Conservation at Oxford University. Email: amydickman@gmail. com. Michel Masozera is a PhD Candidate and Borlag-LEAP Fellow at the University of Vermont. Email: Michel.Masozera@ uvm.edu. Mariam Nguvava served as the HALI Project Socieconomic Research Assistant and currently is a teaching assistant at Sokoine University. Email: mariamnguvava@yahoo.com. Dr. Rudovick Kazwala is a Professor of Veterinary Medicine and Public Health at Sokoine University. Email: kazwala@suanet.ac.tz. Dr. Jonna Mazet is a Professor of Wildlife Epidemiology and Co-Director of the Wildlife Health Center at the University of California Davis. Email: jkmazet@ucdavis.edu. The Health for Animals and Livelihood Improvement (HALI) project was established in 2006 and is a stakeholder-driven research and capacity-building program to assess the effects of zoonotic disease and water management on animal health, biodiversity, and livelihoods in the Ruaha ecosystem, Tanzania. The project is led by Dr. Jonna Mazet. Email: jkmazet@ucdavis. edu. The Global Livestock CRSP is comprised of multidisciplinary, collaborative projects focused on human nutrition, economic growth, environment and policy related to animal agriculture and linked by a global theme of risk in a changing environment. The program is active in East and West Africa, Central Asia and Latin America. This publication was made possible through support provided by the Office of Agriculture, Bureau of Economic Growth, Agriculture and Trade, under Grant No. PCE-G-00-98-00036-00 to University of California, Davis. The opinions expressed herein are those of the authors and do not necessarily reflect the views of USAID. Edited by David Wolking and Susan L. Johnson 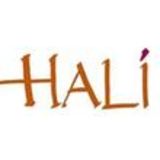 In sub-Saharan Africa, livestock deaths due to disease have large impacts on household income and nutrition. As part of the larger Health fo...

In sub-Saharan Africa, livestock deaths due to disease have large impacts on household income and nutrition. As part of the larger Health fo...