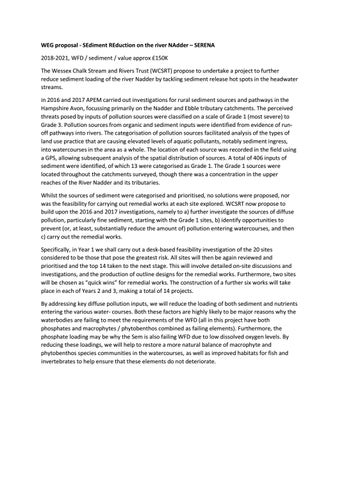 WEG proposal - SEdiment REduction on the river NAdder – SERENA 2018-2021, WFD / sediment / value approx £150K The Wessex Chalk Stream and Rivers Trust (WCSRT) propose to undertake a project to further reduce sediment loading of the river Nadder by tackling sediment release hot spots in the headwater streams. in 2016 and 2017 APEM carried out investigations for rural sediment sources and pathways in the Hampshire Avon, focussing primarily on the Nadder and Ebble tributary catchments. The perceived threats posed by inputs of pollution sources were classified on a scale of Grade 1 (most severe) to Grade 3. Pollution sources from organic and sediment inputs were identified from evidence of runoff pathways into rivers. The categorisation of pollution sources facilitated analysis of the types of land use practice that are causing elevated levels of aquatic pollutants, notably sediment ingress, into watercourses in the area as a whole. The location of each source was recorded in the field using a GPS, allowing subsequent analysis of the spatial distribution of sources. A total of 406 inputs of sediment were identified, of which 13 were categorised as Grade 1. The Grade 1 sources were located throughout the catchments surveyed, though there was a concentration in the upper reaches of the River Nadder and its tributaries. Whilst the sources of sediment were categorised and prioritised, no solutions were proposed, nor was the feasibility for carrying out remedial works at each site explored. WCSRT now propose to build upon the 2016 and 2017 investigations, namely to a) further investigate the sources of diffuse pollution, particularly fine sediment, starting with the Grade 1 sites, b) identify opportunities to prevent (or, at least, substantially reduce the amount of) pollution entering watercourses, and then c) carry out the remedial works. Specifically, in Year 1 we shall carry out a desk-based feasibility investigation of the 20 sites considered to be those that pose the greatest risk. All sites will then be again reviewed and prioritised and the top 14 taken to the next stage. This will involve detailed on-site discussions and investigations, and the production of outline designs for the remedial works. Furthermore, two sites will be chosen as “quick wins” for remedial works. The construction of a further six works will take place in each of Years 2 and 3, making a total of 14 projects. By addressing key diffuse pollution inputs, we will reduce the loading of both sediment and nutrients entering the various water- courses. Both these factors are highly likely to be major reasons why the waterbodies are failing to meet the requirements of the WFD (all in this project have both phosphates and macrophytes / phytobenthos combined as failing elements). Furthermore, the phosphate loading may be why the Sem is also failing WFD due to low dissolved oxygen levels. By reducing these loadings, we will help to restore a more natural balance of macrophyte and phytobenthos species communities in the watercourses, as well as improved habitats for fish and invertebrates to help ensure that these elements do not deteriorate.