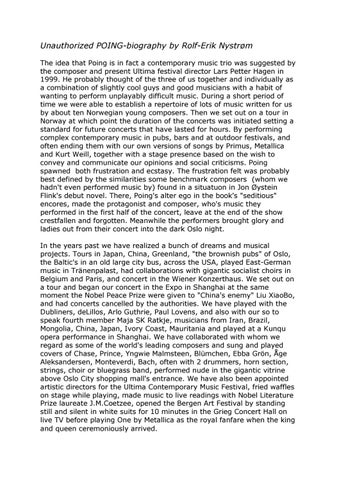 Unauthorized POING-biography by Rolf-Erik Nystrøm The idea that Poing is in fact a contemporary music trio was suggested by the composer and present Ultima festival director Lars Petter Hagen in 1999. He probably thought of the three of us together and individually as a combination of slightly cool guys and good musicians with a habit of wanting to perform unplayably difficult music. During a short period of time we were able to establish a repertoire of lots of music written for us by about ten Norwegian young composers. Then we set out on a tour in Norway at which point the duration of the concerts was initiated setting a standard for future concerts that have lasted for hours. By performing complex contemporary music in pubs, bars and at outdoor festivals, and often ending them with our own versions of songs by Primus, Metallica and Kurt Weill, together with a stage presence based on the wish to convey and communicate our opinions and social criticisms. Poing spawned both frustration and ecstasy. The frustration felt was probably best defined by the similarities some benchmark composers (whom we hadn't even performed music by) found in a situatuon in Jon Øystein Flink's debut novel. There, Poing's alter ego in the book's "seditious" encores, made the protagonist and composer, who's music they performed in the first half of the concert, leave at the end of the show crestfallen and forgotten. Meanwhile the performers brought glory and ladies out from their concert into the dark Oslo night. In the years past we have realized a bunch of dreams and musical projects. Tours in Japan, China, Greenland, "the brownish pubs" of Oslo, the Baltic's in an old large city bus, across the USA, played East-German music in Tränenpalast, had collaborations with gigantic socialist choirs in Belgium and Paris, and concert in the Wiener Konzerthaus. We set out on a tour and began our concert in the Expo in Shanghai at the same moment the Nobel Peace Prize were given to "China's enemy" Liu XiaoBo, and had concerts cancelled by the authorities. We have played with the Dubliners, deLillos, Arlo Guthrie, Paul Lovens, and also with our so to speak fourth member Maja SK Ratkje, musicians from Iran, Brazil, Mongolia, China, Japan, Ivory Coast, Mauritania and played at a Kunqu opera performance in Shanghai. We have collaborated with whom we regard as some of the world's leading composers and sung and played covers of Chase, Prince, Yngwie Malmsteen, Blümchen, Ebba Grön, Åge Aleksandersen, Monteverdi, Bach, often with 2 drummers, horn section, strings, choir or bluegrass band, performed nude in the gigantic vitrine above Oslo City shopping mall's entrance. We have also been appointed artistic directors for the Ultima Contemporary Music Festival, fried waffles on stage while playing, made music to live readings with Nobel Literature Prize laureate J.M.Coetzee, opened the Bergen Art Festival by standing still and silent in white suits for 10 minutes in the Grieg Concert Hall on live TV before playing One by Metallica as the royal fanfare when the king and queen ceremoniously arrived.

For Poing, the most important has always been to make a difference. Either by realizing a composer's "impossible" dreams, surprise a blased audience by showing that contemporary music is entertaining, and that within entertainment and madness there might exist a strong political commitment and existential depth. We have been very lucky in having biographical and personal works composed for us, often based upon us, that has made it possible to present real stories from stage. And the close collaborations with many of the composers have also made it possible to sharpen and have a common goal. Poing consists of three quite different personalities and destinies. But together we have, helped by a sometimes rowdy sincerity towards each other, but also common respect and mutually letting ourselves being inspired by each other, been able to create an attitude and a musical power centre I am proud to be a part of. This hopefully won't end before death do us part. Rolf-Erik NystrĂ¸m Paris, April 13th 2015 (After having devoured a large plate of pork brains) Unauthorized POING biography by Rolf-Erik Nystrøm. Written in Paris, April 13th 2015 (after having devoured a large plate of pork brains).

Unauthorized POING biography by Rolf-Erik Nystrøm. Written in Paris, April 13th 2015 (after having devoured a large plate of pork brains).