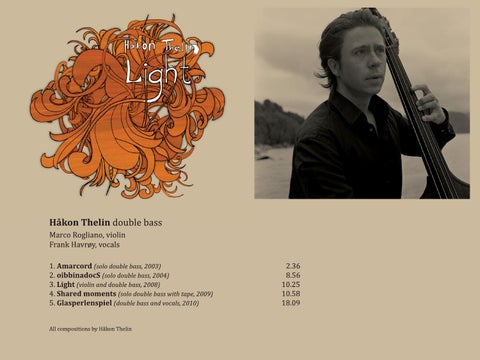 A folk music for the double bass The music on this CD represents a defining discovery of my own musical voice, as it speaks through the double bass. Where the ‘awakening’ has followed a line of rather conventional musical practice, it is ensued by an evolving thought regarding the contextualization of this specific language of music, which I have come to call a folk music for the double bass. The great Italian double bass player and composer Stefano Scodanibbio says that he wants “...to allow the contrabass to sing with its own voice”. During the 1980’s he found this voice, which came from the instrument itself, being based on the possibilities that the instrument provides. The main discovery that allowed such a language to be created was the expansion of flageolet techniques, the most evident being the interchanging of ordinary tones and flageolets. The conception of such a folk music for the double bass has been my main approach in creating this music, and my aim for the sounding result. To create a composed music, bound by intricate fixed rhythms, melodic shapes and forms, but yet to envince the sounding impressions of improvisation. My music is based upon an exploration of certain sounds that speak particularly well through the double bass. The overtones enable a new world of sounds, and at the same time strengthen the link to the fundamentals of all sound. I remember the ensemble where I played free improvisation for the first time. Amarcord. Improvisation, which became a process for composing. And alternative ways of producing sounds. I remember the first encounters with art cinema. Amarcord. ‘A semi-autobiographical coming-of-age tale that combines poignancy with bawdy comedy.’ Organizing and expressing the sounding memories with a new set of tools. The duality of the tone. Of everything! A new music. A folk music for the double bass. Amarcord. I remember…

…oibbinadocS was finished in 2004, and, together with Amarcord, it was among my first destinations on the playful journey around the music and techniques of Stefano Scodanibbio, to whom this record is dedicated. It was written towards the end of an improvisational process where relatively independent phrases of rhythmical, harmonic and even timbral character were organized on an intuitive structural level. As in the music of Scodanibbio, narrative and rhapsodic phrases are being built through an interchanging of ordinary tones and flageolets. This constant changing motion between low and high sounds creates multidimensional rooms where sounds and fragments of melody can evolve. There are also a number of poetic implications in the ‘weight-relationship’ between ordinary tones and flageolets, as Enzo Restagno so gracefully articulates in the liner notes to the recording of Scodanibbio’s Six Duos. Ordinary tones are consistent and have a clear presence. The flageolets are softer and more distant, vibrant in their simplicity, almost as memories or echoes of the resonance of the double bass. One of the main musical elements in oibbinadocS, which has become a major subject in all of my later music, is a constant movement between dissonant and consonant sounds, through an extensive use of glissandi, or in rhythmical or melodic patterns. The original idea for Light appeared when I was planning a series of concerts in different lighthouses along the Norwegian coast. Evoking the image of a lighthouse, pulsating elements establish a sense of light and recognition − short melodic phrases sometimes suddenly appear in unison, like beams of light. The sound of harmonics shines through a diffused and misty atmosphere, and the untraditional playing techniques found and underline the temperament of the waves and of the wind. In Light, I borrowed a little ink from a score of Salvatore Sciarrino, to paint my picture of the sea and to blend the sounds of past and present. To let the double bass make colourful harmonic alterations in the (new) mix with the violin, to let the shadings meet and create interweaved, living figures in moments of virtuosity, to let them bounce together on the strings and on the body. As in Scodanibbio’s duo for violin and double bass Jardins d’Hamilcar, where the traditional rhetorical dualism between the instruments has been obliterated and replaced with a singularity of sound and technique, I sought a homogeneous expression of sounds, which is made possible through the novel flageolet techniques. But previously ‘unheard’ sounds can also in themselves be alienating and thus create imaginary cracks in the perception of the uniform sounds. The work is technically demanding, but with a fleeting and subdued expression. In Luciano Berio’s Naturale (about Sicilian melodies), a work for viola, percussion and recorded voice, the performers play together with prerecorded Sicilian traditional folksong. Naturale sparkled my imagination to write Shared moments, where I used a similar strategy by letting the double bass

play together with a recording of the Indian tabla, as well as prerecorded bass sounds. In Shared moments I experiment with harmonics, multiphonics and percussive techniques, and the work is composed on the basis of an intuitive approach, in which improvisation and experimentation with the playing techniques form the basis. Two different thematic sections, one being played arco and the other pizzicato, consisting of rhythmical and timbral elements are set against each other, and the material within these is varied and developed as the piece unfolds. Towards the middle of the piece, a contrasting third part emerges, which is, interacting with the tabla, represented by an adapted Indian melody. Reminiscences of the melody appear later in the piece, this time in the tape part. The process of composing Shared moments was more about putting together a unique soundscape than presenting the more conventional musical narratives. The recorded sounds usually functions as an additive to the acoustical sound. They alter the original sound in varying degrees, create either gradual or overlapping transformations between sounds or change completely the auditory effect. Often one does not know whether one can distinguish between the acoustic and electroacoustic tone. The intermingling and interrelated compound of (novel) sounds can perhaps broaden our perception of the double bass, and to me it certainly underpins my quest in creating a folk music for the double bass. The unusual combination of bass and voice in Glasperlenspiel creates great expressive possibilities, which are enhanced by the freedom achieved through extended instrumental techniques. I have been lucky to be able to work with the singer Frank Havrøy on techniques for overtone singing that in this piece are combined with my own techniques of harmonics on the double bass. Glasperlenspiel is organized according to an alternating use of two poems, “Zu einer Toccata von Bach” and “Das Glasperlenspiel”, which are taken from Hermann Hesse’s novel by the same title. Following the verses of the two poems, Glasperlenspiel is divided into sections that are repeatedly interwoven. Like characters from ‘Castalia’, the performers partake in a dialogue, an intellectual ‘Klangspiel’ with Hesse’s words. A dissection of words and phrases shapes the textual and phonetic part of the voice and numerical series (derived from the poems) constitute the structural basis for the different sections of the work. Hence, the composition becomes a game with text fragments and musical phrases, in which the explicit communication, or a precise interpretation of the texts, is secondary to the attempts of expressing the very subjective feelings that arise when reading Hesse’s words. The opening is sung without words, except for a theme-fantasy called Liebeslied, which uses some central text fragments from “Das Glasperlenspiel” as well as the melodic material in its original intervallic form (borrowed from a toccata of Johann Sebastian Bach). In unison with the double bass, the vocal part continues with rhythmified singing and recitation of passages from “Zu einer Toccata von Bach”, interrupted by verses of “Das Glasperlenspiel” where a flowing melodic line characterizes the double bass – vivid and brilliant in its dialogue with the singer who more calmly contemplates on fragments and phonemes from the text. Here, a third character is introduced through the voice of the bass player who, like a listener from the ‘outside world’, tries to imitate the erudite scholar with a monotonous but clear articulation. Unable to fully grasp what is expressed, he ends up producing an unredeemed caricature of the voice of the ‘Magister’. The double bass part is based on improvisations and re-writings of phrases from the music of Scodanibbio, which were subsequently organized in rhythmical structures according to the numerical series derived from the text. Many of these inspirational phrases of Scodanibbio are found in his work Due pezzi brillianti, which exhibit a perpetuum mobile that I wanted to transform into a more free and improvisational character. A musical synthesis of the material from both sections (“Das Glasperlenspiel” and “Zu einer Toccata von Bach”) marks the ending of the last “Das Glasperlenspiel” verse, followed by another appearance of the Liebeslied theme – this time as a solo double bass fantasy – that transits into the last verse of “Zu einer Toccata von Bach”. Here, the music radically changes character. Aphoristic utterances echo into textures of floating consonant and dissonant harmonies. The ‘listener’ now approaches a possible understanding of the text, and lets the reverberating music colour his interpretation. Towards the end, as the music gradually consolidates the past and present and resolves into its old shape, the initial Bach melody leads into the final and quiescent Liebeslied.