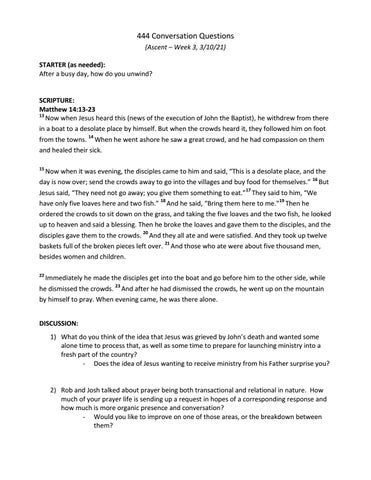 SCRIPTURE: Matthew 14:13-23 13 Now when Jesus heard this (news of the execution of John the Baptist), he withdrew from there in a boat to a desolate place by himself. But when the crowds heard it, they followed him on foot from the towns. 14 When he went ashore he saw a great crowd, and he had compassion on them and healed their sick. 15

Now when it was evening, the disciples came to him and said, “This is a desolate place, and the day is now over; send the crowds away to go into the villages and buy food for themselves.” 16 But Jesus said, “They need not go away; you give them something to eat.”17 They said to him, “We have only five loaves here and two fish.” 18 And he said, “Bring them here to me.”19 Then he ordered the crowds to sit down on the grass, and taking the five loaves and the two fish, he looked up to heaven and said a blessing. Then he broke the loaves and gave them to the disciples, and the disciples gave them to the crowds. 20 And they all ate and were satisfied. And they took up twelve baskets full of the broken pieces left over. 21 And those who ate were about five thousand men, besides women and children. 22

Immediately he made the disciples get into the boat and go before him to the other side, while he dismissed the crowds. 23 And after he had dismissed the crowds, he went up on the mountain by himself to pray. When evening came, he was there alone. DISCUSSION: 1) What do you think of the idea that Jesus was grieved by John’s death and wanted some alone time to process that, as well as some time to prepare for launching ministry into a fresh part of the country? - Does the idea of Jesus wanting to receive ministry from his Father surprise you?

2) Rob and Josh talked about prayer being both transactional and relational in nature. How much of your prayer life is sending up a request in hopes of a corresponding response and how much is more organic presence and conversation? - Would you like to improve on one of those areas, or the breakdown between them?

3) What parallels would you draw between your own spiritual life and the fact that babies born deaf eventually give up their attempts at speech, even though they started off making as many noises as babies who can hear? When hearing God isn’t working, what happens to prayer and your life with Him?

4) In what settings do you find yourself most often hearing from God? And by what means (dreams, angels, Scripture, impressions, etc.)?

5) Do you tend to read the Bible in large chunks or in short segments? Do you consume Scripture like a raisin – a few good chews to get the sweetness out and you’re finished – or like a Jolly Rancher – savor it, roll it around, the flavor fills your entire mouth? (One way isn’t necessarily better, but you wouldn’t savor a raisin, nor crunch down on a Jolly Rancher…usually!) - Consider looking up lectio divina online and trying it on your own or even with this group, if it is unfamiliar to you.

6) Rob and Josh talked about giving God “free space” to speak. In what ways is this easy and difficult for you? Are you someone who likes to always have music, a podcast or even something you must think through stimulating you?

7) How often have you looked to the counsel of godly saints to hear from God? What would help you engage in that practice more often?

8) What questions or practices have helped you determine if a particular leading was God speaking or “just you”?

9) What would be a good next step for you to take to grow in listening prayer? 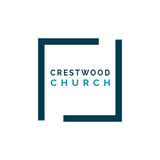