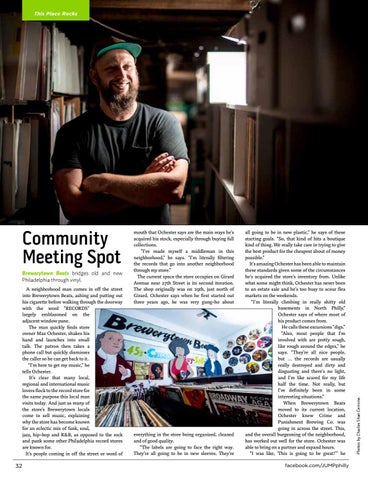 Community Meeting Spot Brewerytown Beats bridges old and new Philadelphia through vinyl. A neighborhood man comes in off the street into Brewerytown Beats, ashing and putting out his cigarette before walking through the doorway with the word “RECORDS” largely emblazoned on the adjacent window pane. The man quickly finds store owner Max Ochester, shakes his hand and launches into small talk. The patron then takes a phone call but quickly dismisses the caller so he can get back to it. “I’m here to get my music,” he tells Ochester. It’s clear that many local, regional and international music lovers flock to the record store for the same purpose this local man visits today. And just as many of the store’s Brewerytown locals come to sell music, explaining why the store has become known for an eclectic mix of funk, soul, jazz, hip-hop and R&B, as opposed to the rock and punk some other Philadelphia record stores are known for. It’s people coming in off the street or word of

mouth that Ochester says are the main ways he’s acquired his stock, especially through buying full collections. “I've made myself a middleman in this neighborhood,” he says. “I’m literally filtering the records that go into another neighborhood through my store.” The current space the store occupies on Girard Avenue near 27th Street is its second iteration. The shop originally was on 29th, just north of Girard. Ochester says when he first started out three years ago, he was very gung-ho about

everything in the store being organized, cleaned and of good quality. “The labels are going to face the right way. They’re all going to be in new sleeves. They’re

all going to be in new plastic,” he says of these starting goals. “So, that kind of hits a boutique kind of thing. We really take care in trying to give the best product for the cheapest about of money possible.” It’s amazing Ochester has been able to maintain these standards given some of the circumstances he’s acquired the store’s inventory from. Unlike what some might think, Ochester has never been to an estate sale and he’s too busy to scour flea markets on the weekends. “I’m literally climbing in really shitty old basements in North Philly,” Ochester says of where most of his product comes from. He calls these excursions “digs.” “Also, most people that I’m involved with are pretty rough, like rough around the edges,” he says. “They’re all nice people, but … the records are usually really destroyed and dirty and disgusting and there's no light, and I’m like scared for my life half the time. Not really, but I’ve definitely been in some interesting situations.” When Brewerytown Beats moved to its current location, Ochester knew Crime and Punishment Brewing Co. was going in across the street. This, and the overall burgeoning of the neighborhood, has worked out well for the store. Ochester was able to bring on a partner and expand hours. “I was like, 'This is going to be great!'” he facebook.com/JUMPphilly