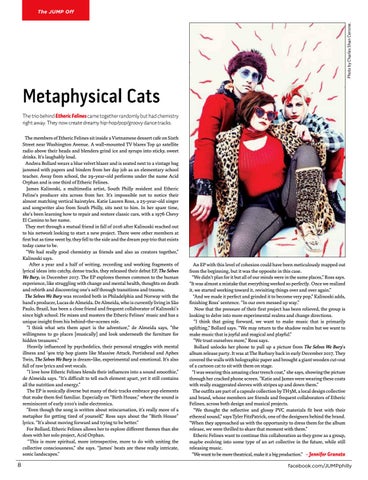 Metaphysical Cats The trio behind Etheric Felines came together randomly but had chemistry right away. They now create dreamy hip-hop/pop/groovy dance tracks. The members of Etheric Felines sit inside a Vietnamese dessert cafe on Sixth Street near Washington Avenue. A wall-mounted TV blares Top 40 satellite radio above their heads and blenders grind ice and syrups into sticky, sweet drinks. It’s laughably loud. Andrea Bollard wears a blue velvet blazer and is seated next to a vintage bag jammed with papers and binders from her day job as an elementary school teacher. Away from school, the 29-year-old performs under the name Acid Orphan and is one third of Etheric Felines. James Kalinoski, a multimedia artist, South Philly resident and Etheric Feline’s producer sits across from her. It’s impossible not to notice their almost matching vertical hairstyles. Katie Lauren Ross, a 25-year-old singer and songwriter also from South Philly, sits next to him. In her spare time, she’s been learning how to repair and restore classic cars, with a 1976 Chevy El Camino to her name. They met through a mutual friend in fall of 2016 after Kalinoski reached out to his network looking to start a new project. There were other members at first but as time went by, they fell to the side and the dream pop trio that exists today came to be. “We had really good chemistry as friends and also as creators together,” Kalinoski says. After a year and a half of writing, recording and working fragments of lyrical ideas into catchy, dense tracks, they released their debut EP, The Selves We Bury, in December 2017. The EP explores themes common to the human experience, like struggling with change and mental health, thoughts on death and rebirth and discovering one's self through transitions and trauma. The Selves We Bury was recorded both in Philadelphia and Norway with the band’s producer, Lucas de Almeida. De Almeida, who is currently living in São Paulo, Brazil, has been a close friend and frequent collaborator of Kalinoski's since high school. He mixes and masters the Etheric Felines’ music and has a unique insight from his behind-the-scenes role. “I think what sets them apart is the adventure,” de Almeida says, “the willingness to go places [musically] and look underneath the furniture for hidden treasures.” Heavily influenced by psychedelics, their personal struggles with mental illness and ’90s trip hop giants like Massive Attack, Portishead and Aphex Twin, The Selves We Bury is dream-like, experimental and emotional. It’s also full of raw lyrics and wet vocals. “I love how Etheric Felines blends their influences into a sound smoothie,” de Almeida says. “It’s difficult to tell each element apart, yet it still contains all the nutrition and energy.” The EP is sonically diverse but many of their tracks embrace pop elements that make them feel familiar. Especially on “Birth House,” where the sound is reminiscent of early 2010’s indie electronica. “Even though the song is written about reincarnation, it’s really more of a metaphor for getting tired of yourself,” Ross says about the “Birth House” lyrics. “It’s about moving forward and trying to be better.” For Bollard, Etheric Felines allows her to explore different themes than she does with her solo project, Acid Orphan. “This is more spiritual, more introspective, more to do with uniting the collective consciousness,” she says. “James’ beats are these really intricate, sonic landscapes.”

An EP with this level of cohesion could have been meticulously mapped out from the beginning, but it was the opposite in this case. “We didn’t plan for it but all of our minds were in the same places,” Ross says. “It was almost a mistake that everything worked so perfectly. Once we realized it, we started working toward it, revisiting things over and over again.” “And we made it perfect and grinded it to become very pop,” Kalinoski adds, finishing Ross’ sentence. “In our own messed up way.” Now that the pressure of their first project has been relieved, the group is looking to delve into more experimental realms and change directions. “I think that going forward, we want to make music that is primarily uplifting,” Bollard says. “We may return to the shadow realm but we want to make music that is joyful and magical and playful.” “We trust ourselves more,” Ross says. Bollard unlocks her phone to pull up a picture from The Selves We Bury’s album release party. It was at The Barbary back in early December 2017. They covered the walls with holographic paper and brought a giant wooden cut-out of a cartoon cat to sit with them on stage. “I was wearing this amazing clear trench coat,” she says, showing the picture through her cracked phone screen. "Katie and James were wearing these coats with really exaggerated sleeves with stripes up and down them.” The outfits are part of a capsule collection by TH3M, a local design collective and brand, whose members are friends and frequent collaborators of Etheric Felines, across both design and musical projects. “We thought the reflective and glossy PVC materials fit best with their ethereal sound,” says Tyler FitzPatrick, one of the designers behind the brand. “When they approached us with the opportunity to dress them for the album release, we were thrilled to share that moment with them.” Etheric Felines want to continue this collaboration as they grow as a group, maybe evolving into some type of an art collective in the future, while still releasing music. “We want to be more theatrical, make it a big production.” - Jennifer Granato facebook.com/JUMPphilly

The JUMP or Die issue, featuring Low Cut Connie, No Thank You, Chuck Treece, Warmdaddy's, Kississippi, Queen of Jeans, TomMay from The Menzi...

The JUMP or Die issue, featuring Low Cut Connie, No Thank You, Chuck Treece, Warmdaddy's, Kississippi, Queen of Jeans, TomMay from The Menzi...