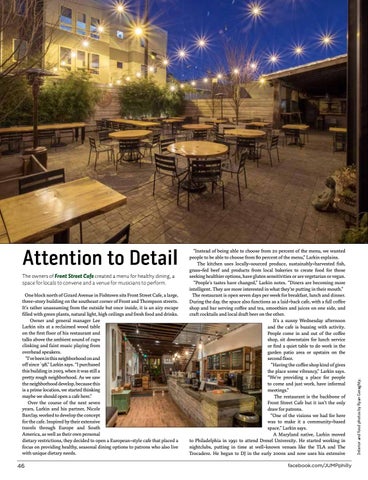 The owners of Front Street Cafe created a menu for healthy dining, a space for locals to convene and a venue for musicians to perform. One block north of Girard Avenue in Fishtown sits Front Street Cafe, a large, three-story building on the southeast corner of Front and Thompson streets. It’s rather unassuming from the outside but once inside, it is an airy escape filled with green plants, natural light, high ceilings and fresh food and drinks. Owner and general manager Lee Larkin sits at a reclaimed wood table on the first floor of his restaurant and talks above the ambient sound of cups clinking and faint music playing from overhead speakers. “I’ve been in this neighborhood on and off since `98,” Larkin says. “I purchased this building in 2003, when it was still a pretty rough neighborhood. As we saw the neighborhood develop, because this is a prime location, we started thinking maybe we should open a cafe here.” Over the course of the next seven years, Larkin and his partner, Nicole Barclay, worked to develop the concept for the cafe. Inspired by their extensive travels through Europe and South America, as well as their own personal dietary restrictions, they decided to open a European-style cafe that placed a focus on providing healthy, seasonal dining options to patrons who also live with unique dietary needs.

“Instead of being able to choose from 20 percent of the menu, we wanted people to be able to choose from 80 percent of the menu,” Larkin explains. The kitchen uses locally-sourced produce, sustainably-harvested fish, grass-fed beef and products from local bakeries to create food for those seeking healthier options, have gluten sensitivities or are vegetarian or vegan. “People’s tastes have changed,” Larkin notes. “Diners are becoming more intelligent. They are more interested in what they’re putting in their mouth.” The restaurant is open seven days per week for breakfast, lunch and dinner. During the day, the space also functions as a laid-back cafe, with a full coffee shop and bar serving coffee and tea, smoothies and juices on one side, and craft cocktails and local draft beer on the other. It’s a sunny Wednesday afternoon and the cafe is buzzing with activity. People come in and out of the coffee shop, sit downstairs for lunch service or find a quiet table to do work in the garden patio area or upstairs on the second floor. “Having the coffee shop kind of gives the place some vibrancy,” Larkin says. “We’re providing a place for people to come and just work, have informal meetings.” The restaurant is the backbone of Front Street Cafe but it isn’t the only draw for patrons. “One of the visions we had for here was to make it a community-based space,” Larkin says. A Maryland native, Larkin moved to Philadelphia in 1991 to attend Drexel University. He started working in nightclubs, putting in time at well-known venues like the TLA and The Trocadero. He began to DJ in the early 2000s and now uses his extensive