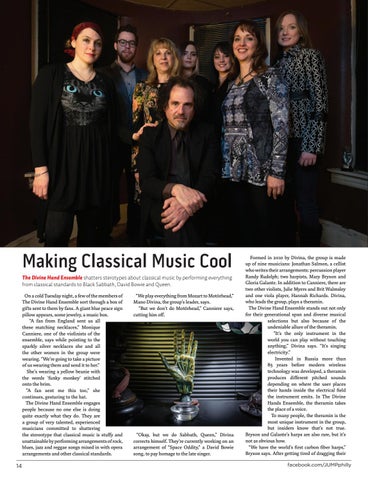 Making Classical Music Cool The Divine Hand Ensemble shatters sterotypes about classical music by performing everything from classical standards to Black Sabbath, David Bowie and Queen. On a cold Tuesday night, a few of the members of The Divine Hand Ensemble sort through a box of gifts sent to them by fans. A giant blue peace sign pillow appears, some jewelry, a music box. “A fan from England sent us all these matching necklaces,” Monique Canniere, one of the violinists of the ensemble, says while pointing to the sparkly silver necklaces she and all the other women in the group were wearing. “We’re going to take a picture of us wearing them and send it to her.” She’s wearing a yellow beanie with the words ‘funky monkey’ stitched onto the brim. “A fan sent me this too,” she continues, gesturing to the hat. The Divine Hand Ensemble engages people because no one else is doing quite exactly what they do. They are a group of very talented, experienced musicians committed to shattering the stereotype that classical music is stuffy and unattainable by performing arrangements of rock, blues, jazz and reggae songs mixed in with opera arrangements and other classical standards.

“We play everything from Mozart to Motörhead,” Mano Divina, the group’s leader, says. “But we don’t do Motörhead,” Canniere says, cutting him off.

“Okay, but we do Sabbath, Queen,” Divina corrects himself. They’re currently working on an arrangement of “Space Oddity,” a David Bowie song, to pay homage to the late singer.

Formed in 2010 by Divina, the group is made up of nine musicians: Jonathan Salmon, a cellist who writes their arrangements; percussion player Randy Rudolph; two harpists, Mary Bryson and Gloria Galante. In addition to Canniere, there are two other violists, Julie Myers and Brit Walmsley and one viola player, Hannah Richards. Divina, who leads the group, plays a theramin. The Divine Hand Ensemble stands out not only for their generational span and diverse musical selections but also because of the undeniable allure of the theramin. “It’s the only instrument in the world you can play without touching anything,” Divina says. “It’s singing electricity.” Invented in Russia more than 85 years before modern wireless technology was developed, a theramin produces different pitched sounds depending on where the user places their hands inside the electrical field the instrument emits. In The Divine Hands Ensemble, the theramin takes the place of a voice. To many people, the theramin is the most unique instrument in the group, but insiders know that’s not true. Bryson and Galante’s harps are also rare, but it’s not as obvious how. “We have the world’s first carbon fiber harps,” Bryson says. After getting tired of dragging their facebook.com/JUMPphilly