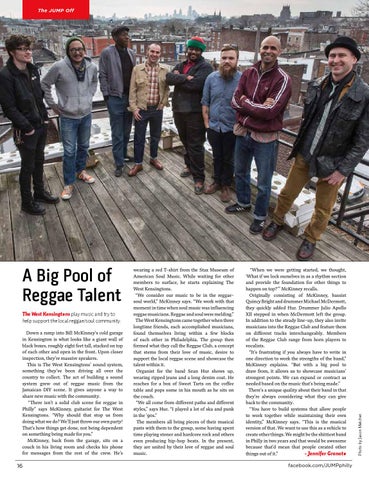 A Big Pool of Reggae Talent The West Kensingtons play music and try to help support the local reggae/soul community. Down a ramp into Bill McKinney’s cold garage in Kensington is what looks like a giant wall of black boxes, roughly eight feet tall, stacked on top of each other and open in the front. Upon closer inspection, they’re massive speakers. This is The West Kensingtons’ sound system, something they’ve been driving all over the country to collect. The act of building a sound system grew out of reggae music from the Jamaican DIY scene. It gives anyone a way to share new music with the community. “There isn’t a solid club scene for reggae in Philly” says McKinney, guitarist for The West Kensingtons. “Why should that stop us from doing what we do? We’ll just throw our own party! That’s how things get done, not being dependent on something being made for you.” McKinney, back from the garage, sits on a couch in his living room and checks his phone for messages from the rest of the crew. He’s

wearing a red T-shirt from the Stax Museum of American Soul Music. While waiting for other members to surface, he starts explaining The West Kensingtons. “We consider our music to be in the reggaesoul world,” McKinney says. “We work with that moment in time when soul music was influencing reggae musicians. Reggae and soul were melding.” The West Kensingtons came together when three longtime friends, each accomplished musicians, found themselves living within a few blocks of each other in Philadelphia. The group then formed what they call the Reggae Club, a concept that stems from their love of music, desire to support the local reggae scene and showcase the talent within it. Organist for the band Sean Hur shows up, wearing ripped jeans and a long denim coat. He reaches for a box of Sweet Tarts on the coffee table and pops some in his mouth as he sits on the couch. “We all come from different paths and different styles,” says Hur. “I played a lot of ska and punk in the ’90s.” The members all bring pieces of their musical pasts with them to the group, some having spent time playing stoner and hardcore rock and others even producing hip-hop beats. In the present, they are united by their love of reggae and soul music.

“When we were getting started, we thought, ‘What if we lock ourselves in as a rhythm section and provide the foundation for other things to happen on top?’” McKinney recalls. Originally consisting of McKinney, bassist Quincy Bright and drummer Michael McDermott, they quickly added Hur. Drummer Julio Apollo XII stepped in when McDermott left the group. In addition to the steady line-up, they also invite musicians into the Reggae Club and feature them on different tracks interchangeably. Members of the Reggae Club range from horn players to vocalists. “It’s frustrating if you always have to write in one direction to work the strengths of the band,” McKinney explains. “But with a big pool to draw from, it allows us to showcase musicians’ strongest points. We can expand or contract as needed based on the music that’s being made.” There’s a unique quality about their band in that they’re always considering what they can give back to the community. “You have to build systems that allow people to work together while maintaining their own identity,” McKinney says. “This is the musical version of that. We want to use this as a vehicle to create other things. We might be the shittiest band in Philly in two years and that would be awesome because that’d mean that people created other - Jennifer Granato things out of it.” facebook.com/JUMPphilly