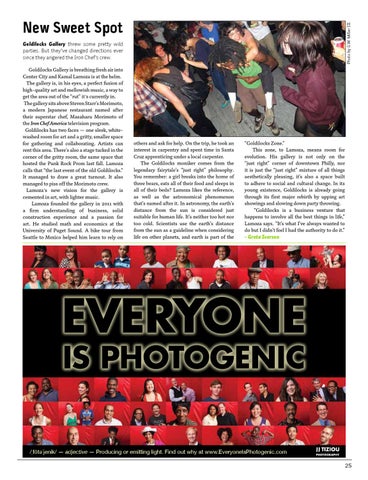 New Sweet Spot Goldilocks Gallery threw some pretty wild parties. But they've changed directions ever since they angered the Iron Chef's crew. Goldilocks Gallery is breathing fresh air into Center City and Kamal Lamoza is at the helm. The gallery is, in his eyes, a perfect fusion of high-quality art and mellowish music, a way to get the area out of the “rut” it’s currently in. The gallery sits above Steven Starr’s Morimoto, a modern Japanese restaurant named after their superstar chef, Masaharu Morimoto of the Iron Chef America television program. Goldilocks has two faces — one sleek, whitewashed room for art and a gritty, smaller space for gathering and collaborating. Artists can rent this area. There’s also a stage tucked in the corner of the gritty room, the same space that hosted the Punk Rock Prom last fall. Lamoza calls that “the last event of the old Goldilocks.” It managed to draw a great turnout. It also managed to piss off the Morimoto crew. Lamoza’s new vision for the gallery is cemented in art, with lighter music. Lamoza founded the gallery in 2011 with a firm understanding of business, solid construction experience and a passion for art. He studied math and economics at the University of Puget Sound. A bike tour from Seattle to Mexico helped him learn to rely on

others and ask for help. On the trip, he took an interest in carpentry and spent time in Santa Cruz apprenticing under a local carpenter. The Goldilocks moniker comes from the legendary fairytale’s “just right” philosophy. You remember: a girl breaks into the home of three bears, eats all of their food and sleeps in all of their beds? Lamoza likes the reference, as well as the astronomical phenomenon that’s named after it. In astronomy, the earth’s distance from the sun is considered just suitable for human life. It’s neither too hot nor too cold. Scientists use the earth’s distance from the sun as a guideline when considering life on other planets, and earth is part of the

“Goldilocks Zone.” This zone, to Lamoza, means room for evolution. His gallery is not only on the “just right” corner of downtown Philly, nor it is just the “just right” mixture of all things aesthetically pleasing, it’s also a space built to adhere to social and cultural change. In its young existence, Goldilocks is already going through its first major rebirth by upping art showings and slowing down party throwing. “Goldilocks is a business venture that happens to involve all the best things in life,” Lamoza says. “It’s what I’ve always wanted to do but I didn’t feel I had the authority to do it.” - Greta Iverson