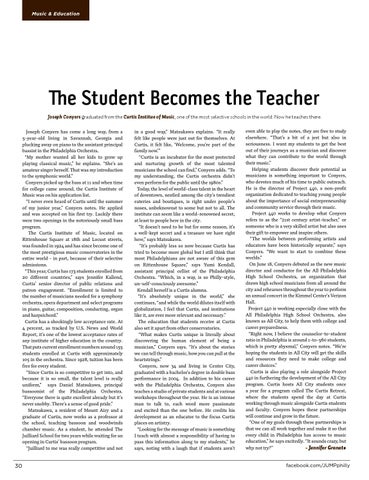 The Student Becomes the Teacher Joseph Conyers graduated from the Curtis Institue of Music, one of the most selective schools in the world. Now he teaches there. Joseph Conyers has come a long way, from a 5-year-old living in Savannah, Georgia and plucking away on piano to the assistant principal bassist in the Philadelphia Orchestra. “My mother wanted all her kids to grow up playing classical music,” he explains. “She’s an amateur singer herself. That was my introduction to the symphonic world.” Conyers picked up the bass at 11 and when time for college came around, the Curtis Institute of Music was on his application list. “I never even heard of Curtis until the summer of my junior year,” Conyers notes. He applied and was accepted on his first try. Luckily there were two openings in the notoriously small bass program. The Curtis Institute of Music, located on Rittenhouse Square at 18th and Locust streets, was founded in 1924 and has since become one of the most prestigious music conservatories in the entire world - in part, because of their selective admissions. “This year, Curtis has 173 students enrolled from 20 different countries,” says Jennifer Kallend, Curtis’ senior director of public relations and patron engagement. “Enrollment is limited to the number of musicians needed for a symphony orchestra, opera department and select programs in piano, guitar, composition, conducting, organ and harpsichord.” Curtis has a shockingly low acceptance rate. At 4 percent, as tracked by U.S. News and World Report, it’s one of the lowest acceptance rates of any institute of higher education in the country. That puts current enrollment numbers around 155 students enrolled at Curtis with approximately 105 in the orchestra. Since 1928, tuition has been free for every student. “Since Curtis is so competitive to get into, and because it is so small, the talent level is really uniform,” says Daniel Matsukawa, principal bassoonist of the Philadelphia Orchestra. “Everyone there is quite excellent already but it’s never snobby. There’s a sense of good pride.” Matsukawa, a resident of Mount Airy and a graduate of Curtis, now works as a professor at the school, teaching bassoon and woodwinds chamber music. As a student, he attended The Juilliard School for two years while waiting for an opening in Curtis’ bassoon program. “Juilliard to me was really competitive and not

in a good way,” Matsukawa explains. “It really felt like people were just out for themselves. At Curtis, it felt like, ‘Welcome, you’re part of the family now.’” “Curtis is an incubator for the most protected and nurturing growth of the most talented musicians the school can find,” Conyers adds. “To my understanding, the Curtis orchestra didn’t even perform for the public until the 1980s.” Today, the level of world-class talent in the heart of downtown, nestled among the city’s trendiest eateries and boutiques, is right under people’s noses, unbeknownst to some but not to all. The institute can seem like a world-renowned secret, at least to people here in the city. “It doesn’t need to be but for some reason, it’s a well-kept secret and a treasure we have right here,” says Matsukawa. “It’s probably less so now because Curtis has tried to become more global but I still think that most Philadelphians are not aware of this gem on Rittenhouse Square,” says Yumi Kendall, assistant principal cellist of the Philadelphia Orchestra. “Which, in a way, is so Philly-style, un-self-consciously awesome.” Kendall herself is a Curtis alumna. “It’s absolutely unique in the world,” she continues, “and while the world dilutes itself with globalization, I feel that Curtis, and institutions like it, are ever more relevant and necessary.” The education that students receive at Curtis also set it apart from other conservatories. “What makes Curtis unique is literally about discovering the human element of being a musician,” Conyers says. “It’s about the stories we can tell through music, how you can pull at the heartstrings.” Conyers, now 34 and living in Center City, graduated with a bachelor’s degree in double bass performance in 2004. In addition to his career with the Philadelphia Orchestra, Conyers also teaches a studio of private students and at various workshops throughout the year. He is an intense man to talk to, each word more passionate and excited than the one before. He credits his development as an educator to the focus Curtis places on artistry. “Looking for the message of music is something I teach with almost a responsibility of having to pass this information along to my students,” he says, noting with a laugh that if students aren’t

even able to play the notes, they are free to study elsewhere. “That’s a bit of a jest but also in seriousness. I want my students to get the best out of their journeys as a musician and discover what they can contribute to the world through their music.” Helping students discover their potential as musicians is something important to Conyers, who devotes much of his time to public outreach. He is the director of Project 440, a non-profit organization dedicated to teaching young people about the importance of social entrepreneurship and community service through their music. Project 440 works to develop what Conyers refers to as the “21st century artist-teacher,” or someone who is a very skilled artist but also uses their gift to empower and inspire others. “The worlds between performing artists and educators have been historically separate,” says Conyers. “We want to start to combine these worlds.” On June 18, Conyers debuted as the new music director and conductor for the All Philadelphia High School Orchestra, an organization that draws high school musicians from all around the city and rehearses throughout the year to perform an annual concert in the Kimmel Center’s Verizon Hall. Project 440 is working especially close with the All Philadelphia High School Orchestra, also known as All City, to help them with college and career preparedness. “Right now, I believe the counselor-to-student ratio in Philadelphia is around 1-to-560 students, which is pretty abysmal,” Conyers notes. “We’re hoping the students in All City will get the skills and resources they need to make college and career choices.” Curtis is also playing a role alongside Project 440 in furthering the development of the All City program. Curtis hosts All City students once a year for a program called The Curtis Retreat, where the students spend the day at Curtis working through music alongside Curtis students and faculty. Conyers hopes these partnerships will continue and grow in the future. “One of my goals through these partnerships is that we can all work together and make it so that every child in Philadelphia has access to music education,” he says excitedly. “It sounds crazy, but - Jennifer Granato why not try?” facebook.com/JUMPphilly