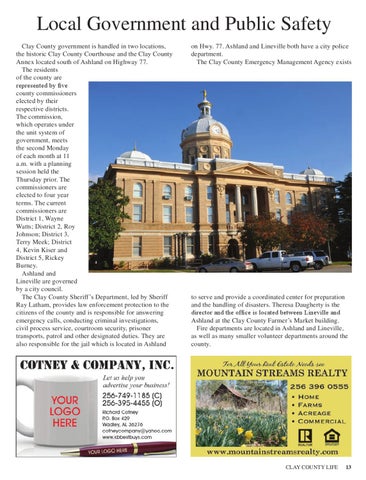 Local Government and Public Safety Clay County government is handled in two locations, the historic Clay County Courthouse and the Clay County Annex located south of Ashland on Highway 77. The residents of the county are represented by five county commissioners elected by their respective districts. The commission, which operates under the unit system of government, meets the second Monday of each month at 11 a.m. with a planning session held the Thursday prior. The commissioners are elected to four year terms. The current commissioners are District 1, Wayne Watts; District 2, Roy Johnson; District 3, Terry Meek; District 4, Kevin Kiser and District 5, Rickey Burney. Ashland and Lineville are governed by a city council. The Clay County Sheriffâ&amp;#x20AC;&amp;#x2122;s Department, led by Sheriff Ray Latham, provides law enforcement protection to the citizens of the county and is responsible for answering emergency calls, conducting criminal investigations, civil process service, courtroom security, prisoner transports, patrol and other designated duties. They are also responsible for the jail which is located in Ashland

on Hwy. 77. Ashland and Lineville both have a city police department. The Clay County Emergency Management Agency exists

to serve and provide a coordinated center for preparation and the handling of disasters. Theresa Daugherty is the director and the office is located between Lineville and Ashland at the Clay County Farmerâ&amp;#x20AC;&amp;#x2122;s Market building. Fire departments are located in Ashland and Lineville, as well as many smaller volunteer departments around the county.

Clay County Chamber of Commerce is proud to present its 3rd annual issue. Our magazine strives to show locals and tourists alike everything there is to love about Clay County, and everything that makes it unique. 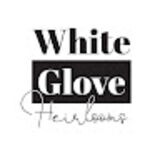