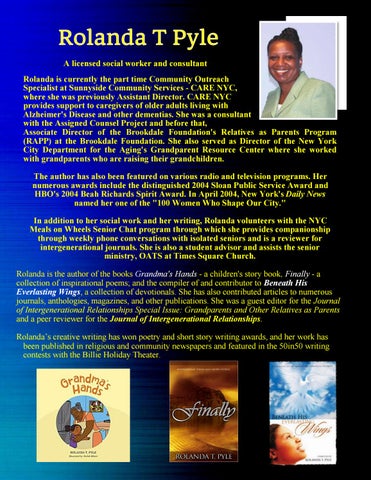 A licensed social worker and consultant Rolanda is currently the part time Community Outreach Specialist at Sunnyside Community Services - CARE NYC, where she was previously Assistant Director. CARE NYC provides support to caregivers of older adults living with Alzheimer&#39;s Disease and other dementias. She was a consultant with the Assigned Counsel Project and before that, Associate Director of the Brookdale Foundation&#39;s Relatives as Parents Program (RAPP) at the Brookdale Foundation. She also served as Director of the New York City Department for the Aging&#39;s Grandparent Resource Center where she worked with grandparents who are raising their grandchildren. The author has also been featured on various radio and television programs. Her numerous awards include the distinguished 2004 Sloan Public Service Award and HBO&#39;s 2004 Beah Richards Spirit Award. In April 2004, New York&#39;s Daily News named her one of the &quot;100 Women Who Shape Our City.&quot; In addition to her social work and her writing, Rolanda volunteers with the NYC Meals on Wheels Senior Chat program through which she provides companionship through weekly phone conversations with isolated seniors and is a reviewer for intergenerational journals. She is also a student advisor and assists the senior ministry, OATS at Times Square Church. Rolanda is the author of the books Grandma&#39;s Hands - a children&#39;s story book, Finally - a collection of inspirational poems; and the compiler of and contributor to Beneath His Everlasting Wings, a collection of devotionals. She has also contributed articles to numerous journals, anthologies, magazines, and other publications. She was a guest editor for the Journal of Intergenerational Relationships Special Issue: Grandparents and Other Relatives as Parents and a peer reviewer for the Journal of Intergenerational Relationships. Rolandaâ&amp;#x20AC;&amp;#x2122;s creative writing has won poetry and short story writing awards, and her work has been published in religious and community newspapers and featured in the 50in50 writing contests with the Billie Holiday Theater. 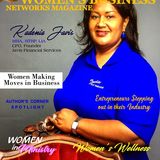