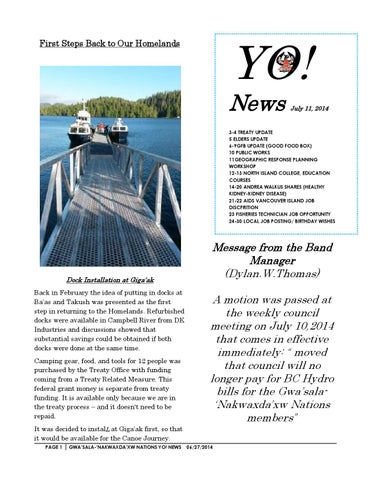 First Steps Back to Our Homelands

Dock Installation at Giga’ak Back in February the idea of putting in docks at Ba’as and Takush was presented as the first step in returning to the Homelands. Refurbished docks were available in Campbell River from DK Industries and discussions showed that substantial savings could be obtained if both docks were done at the same time. Camping gear, food, and tools for 12 people was purchased by the Treaty Office with funding coming from a Treaty Related Measure. This federal grant money is separate from treaty funding. It is available only because we are in the treaty process – and it doesn't need to be repaid.

Message from the Band Manager (Dylan.W.Thomas) A motion was passed at the weekly council meeting on July 10,2014 that comes in effective immediately: “ moved that council will no longer pay for BC Hydro bills for the Gwa’sala‘Nakwaxda’xw Nations members”

It was decided to instalL at Giga’ak first, so that it would be available for the Canoe Journey. PAGE 1 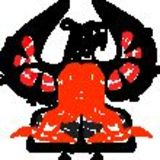 Another issue of the newsletter for the Gwa'sala-'Nakwaxda'xw Nation

Another issue of the newsletter for the Gwa'sala-'Nakwaxda'xw Nation