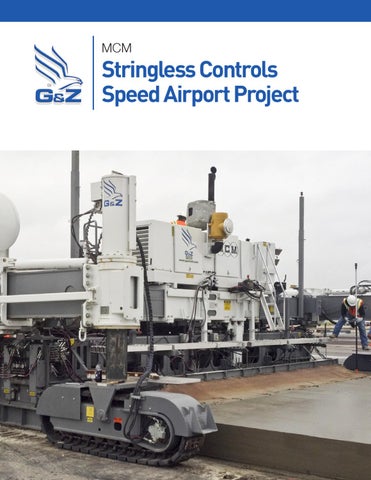 STRINGLESS CONTROLS SPEED AIRPORT PROJECT Compared to mainline highway paving, slipforming concrete taxiways, aprons, and runways at an active airport is a challenging business. Production is hampered by the many small, irregularly shaped pieces of pavement that need to be paved one at a time.

pavement. Most of that is 17-inch jointed plain concrete with no steel. There are smaller amounts of 15-inch and 8-inch concrete pavement.

That’s the situation faced by MCM at Dallas Love Field Airport, a heavy civil and building contractor with corporate offices in Irving, Texas. At Dallas Love Field Airport, the city of Dallas and Southwest Airlines are collaborating to build a $500 Million-plus airport renovation project. A number of gates must remain open during four years of construction, which will wind up in 2015.

“The biggest challenges are the small pieces of pavement and the phasing,” says Luis Munilla, Business Operations Manager for MCM in Texas. “Our average production days as we get into the largest segments of work are going to be in the area of 1,200 cubic yards per day.” To take on the paving project, MCM bought a new four-track S850 Guntert &amp; Zimmerman slipform paver fitted with a stringless control package from Leica Geosystems.

MCM has a $68 Million contract to remove concrete, grade the subgrade and base, relocate utilities (including a new aircraft refueling system), and place 298,000 square yards of new concrete

MCM’S ROOTS IN CUBA MCM would never have existed if not for the powerful family bond and the ethics instilled by Fernando Munilla Sr. in the face of devastating oppression when Cuba fell to communism. For nearly two decades (1941 to 1960), Mr. Munilla was the country’s premier builder and a pioneer in construction methodology. His company included three of the largest concrete plants in Cuba, and built a great portion of the nation’s pre-cast and pre-stressed construction projects. “Our father demanded quality in everything,” says Jorge Munilla, MCM’s president. “His insistence on quality earned him a reputation for excellence. As a result, his firm was selected for some of the most important and historical construction projects in Cuba.”

Then, in 1960, Fidel Castro confiscated the firm. Four of the six Munilla brothers made it to the U.S. through the Pedro Pan Program just before the Bay of Pigs invasion and were placed in an orphanage in Ohio. The two youngest sons stayed with Maria, their mother, till safe passage was arranged. Fernando stayed behind orchestrating Covert Operations against the Castro regime, was arrested three times and finally managed to escape by boat, bringing with him only his credentials and a fierce determination to reunite his family. He succeeded within a year

offices in Irving, TX and Panama City, Panama. Established in 1983, MCM ranks as the 6th largest Hispanic-owned construction company in the U.S., and 48th largest overall Hispanic-owned firm in the nation. With a $1 Billion dollar bonding capacity, MCM utilizes its solid financial resources to guarantee a timely completion. MCM’s portfolio of work includes road &amp; bridge, aviation, education, municipal and building construction for both government and private clients. “When we came to Texas we were committed to hire a local workforce”, Munilla continues, “and we understood that the key to a successful project was a solid team that would offer the best possible value to our client, so we strived to find the best concrete paver on the market. Guntert &amp; Zimmerman is number one and in spite of the inherent complexities of the job the project is advancing smoothly”. “We also purchased the Leica stringless package with the paver, and we have had some amazing results with that,” Munilla continues. “Many of our pavements out here are right on plan grade, or within 1/100th of an inch; the results are just amazing. The stringless controls really help trucking and production.” “Typically MCM paves either 25 or 30 feet wide, and saws the pavement into 12.5-foot square panels or 15-foot panels,” explains Joe Roundtree, General Superintendent for MCM’s Dallas Love Field Airport. “The Guntert &amp; Zimmerman paver helps with placing small pieces because the tracks can turn 90 degrees under the paver at the end of a run”. We asked if the stringless controls help with small pieces. “Absolutely!” says Mark Vanness, the paving estimator for MCM in Texas. “We can set up the machine to do those pieces in the morning and then we just move from one to the other, with no stringline. The digital model is already programmed into the machine. You don’t have to worry about anything being in the way.”

With stringless controls, two robotic total stations utilize two prisms on the paver to “tell” the paver its precise location. A computer onboard the paver then computes the difference between the actual location of the paver pan and the design location in the 3D digital model. With that information, the onboard computer can automatically control the paver pan. MCM actually uses four robotic total stations on the project. “We have additional total stations out there so that we can check our depths and our pavement surface right behind the paver,” says Vanness.“We have a man who stands on the rear catwalk of the paver when we get to the area where we need to check the height of the pavement. He uses a Leica rover and data collector to check the existing slab. That way we can move forward with confidence that we don’t have any issues with non-conforming pavement.” Quality control inspectors on the job “are thrilled,” says Roundtree, with the pavement edges produced by the Guntert &amp; Zimmerman S850. “The edges are sharp and clean, and this is a very big point of contention on airport jobs,” he says. MCM gains about 15 to 18 percent in production by using the stringless controls, compared to stringline. The stringless system eliminates the cost of line setting and the issues that go along with it. “One of the biggest advantages to stringless is that you create a 3D model,” says Munilla. “Many people don’t consider this, but that 3D model lets you check for flaws and problems that may not show up in any other way. When we build this model, we can actually look at the surface and check drainages and other things that keep us from running into bottlenecks and problems in the future. So that model is a neat thing about stringless.” 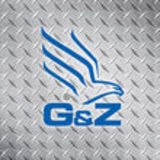