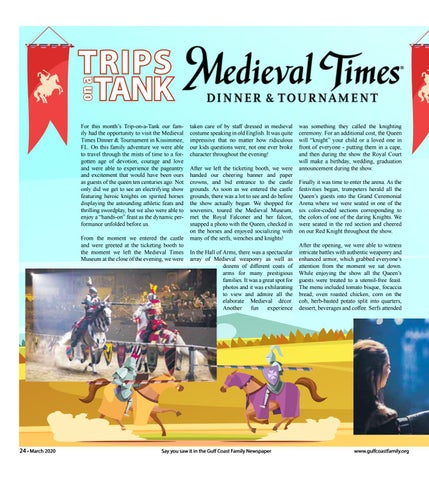 TRIPS TANK For this month’s Trip-on-a-Tank our family had the opportunity to visit the Medieval Times Dinner & Tournament in Kissimmee, FL. On this family adventure we were able to travel through the mists of time to a forgotten age of devotion, courage and love and were able to experience the pageantry and excitement that would have been ours as guests of the queen ten centuries ago. Not only did we get to see an electrifying show featuring heroic knights on spirited horses displaying the astounding athletic feats and thrilling swordplay, but we also were able to enjoy a “hands-on” feast as the dynamic performance unfolded before us. From the moment we entered the castle and were greeted at the ticketing booth to the moment we left the Medieval Times Museum at the close of the evening, we were

taken care of by staff dressed in medieval costume speaking in old English. It was quite impressive that no matter how ridiculous our kids questions were, not one ever broke character throughout the evening! After we left the ticketing booth, we were handed our cheering banner and paper crowns, and bid entrance to the castle grounds. As soon as we entered the castle grounds, there was a lot to see and do before the show actually began. We shopped for souvenirs, toured the Medieval Museum, met the Royal Falconer and her falcon, snapped a photo with the Queen, checked in on the horses and enjoyed socializing with many of the serfs, wenches and knights! In the Hall of Arms, there was a spectacular array of Medieval weaponry as well as dozens of different coats of arms for many prestigious families. It was a great spot for photos and it was exhilarating to view and admire all the elaborate Medieval décor. Another fun experience

was something they called the knighting ceremony. For an additional cost, the Queen will “knight” your child or a loved one in front of everyone - putting them in a cape, and then during the show the Royal Court will make a birthday, wedding, graduation announcement during the show. Finally it was time to enter the arena. As the festivities began, trumpeters herald all the Queen’s guests into the Grand Ceremonial Arena where we were seated in one of the six color-coded sections corresponding to the colors of one of the daring Knights. We were seated in the red section and cheered on our Red Knight throughout the show. After the opening, we were able to witness intricate battles with authentic weaponry and enhanced armor, which grabbed everyone’s attention from the moment we sat down. While enjoying the show all the Queen’s guests were treated to a utensil-free feast. The menu included tomato bisque, focaccia bread, oven roasted chicken, corn on the cob, herb-basted potato split into quarters, dessert, beverages and coffee. Serfs attended