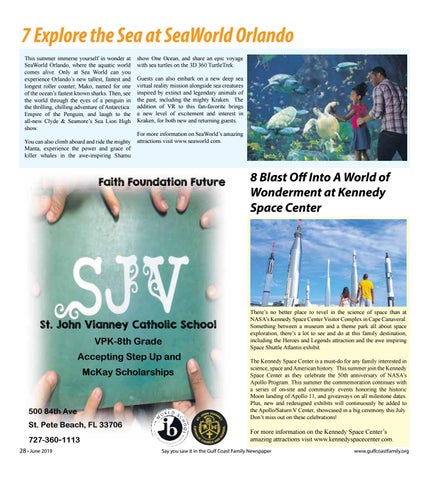 7 Explore the Sea at SeaWorld Orlando This summer immerse yourself in wonder at SeaWorld Orlando, where the aquatic world comes alive. Only at Sea World can you experience Orlando’s new tallest, fastest and longest roller coaster, Mako, named for one of the ocean’s fastest known sharks. Then, see the world through the eyes of a penguin in the thrilling, chilling adventure of Antarctica: Empire of the Penguin, and laugh to the all-new Clyde & Seamore’s Sea Lion High show. You can also climb aboard and ride the mighty Manta, experience the power and grace of killer whales in the awe-inspiring Shamu

show One Ocean, and share an epic voyage with sea turtles on the 3D 360 TurtleTrek. Guests can also embark on a new deep sea virtual reality mission alongside sea creatures inspired by extinct and legendary animals of the past, including the mighty Kraken. The addition of VR to this fan-favorite brings a new level of excitement and interest in Kraken, for both new and returning guests. For more information on SeaWorld’s amazing attractions visit www.seaworld.com.

There’s no better place to revel in the science of space than at NASA’s Kennedy Space Center Visitor Complex in Cape Canaveral. Something between a museum and a theme park all about space exploration, there’s a lot to see and do at this family destination, including the Heroes and Legends attraction and the awe inspiring Space Shuttle Atlantis exhibit. The Kennedy Space Center is a must-do for any family interested in science, space and American history. This summer join the Kennedy Space Center as they celebrate the 50th anniversary of NASA’s Apollo Program. This summer the commemoration continues with a series of on-site and community events honoring the historic Moon landing of Apollo 11, and giveaways on all milestone dates. Plus, new and redesigned exhibits will continuously be added to the Apollo/Saturn V Center, showcased in a big ceremony this July. Don’t miss out on these celebrations!

For more information on the Kennedy Space Center’s amazing attractions visit www.kennedyspacecenter.com. Say you saw it in the Gulf Coast Family Newspaper