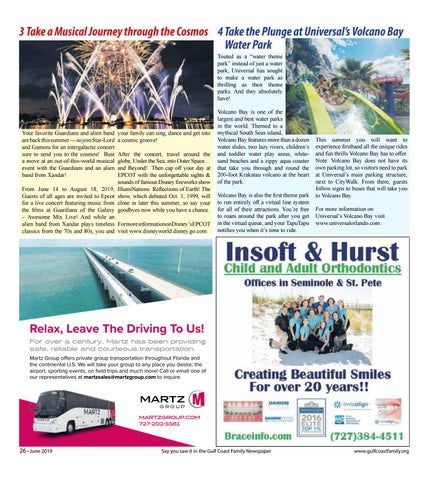 3 Take a Musical Journey through the Cosmos 4 Take the Plunge at Universal’s Volcano Bay Water Park Touted as a “water theme park” instead of just a water park, Universal has sought to make a water park as thrilling as their theme parks. And they absolutely have!

Your favorite Guardians and alien band are back this summer — so join Star-Lord and Gamora for an intergalactic concert sure to send you to the cosmos! Bust a move at an out-of-this-world musical event with the Guardians and an alien band from Xandar!

your family can sing, dance and get into a cosmic groove! After the concert, travel around the globe, Under the Sea, into Outer Space… and Beyond! Then cap off your day at EPCOT with the unforgettable sights & sounds of famous Disney fireworks show IllumiNations: Reflections of Earth! The show, which debuted Oct. 1, 1999, will close in later this summer, so say your goodbyes now while you have a chance.

From June 14 to August 18, 2019, Guests of all ages are invited to Epcot for a live concert featuring music from the films at Guardians of the Galaxy – Awesome Mix Live! And while an alien band from Xandar plays timeless For more information on Disney’s EPCOT classics from the 70s and 80s, you and visit www.disneyworld.disney.go.com.

Volcano Bay is one of the largest and best water parks in the world. Themed to a mythical South Seas island, Volcano Bay features more than a dozen water slides, two lazy rivers, children’s and toddler water play areas, whitesand beaches and a zippy aqua coaster that take you through and round the 200-foot Krakatau volcano at the heart of the park. Volcano Bay is also the first theme park to run entirely off a virtual line system for all of their attractions. You’re free to roam around the park after you get in the virtual queue, and your TapuTapu notifies you when it’s time to ride.

This summer you will want to experience firsthand all the unique rides and fun thrills Volcano Bay has to offer. Note: Volcano Bay does not have its own parking lot, so visitors need to park at Universal’s main parking structure, next to CityWalk. From there, guests follow signs to buses that will take you to Volcano Bay. For more information on Universal’s Volcano Bay visit www.universalorlando.com.

Relax, Leave The Driving To Us! For over a century, Martz has been providing safe, reliable and courteous transportation. Martz Group offers private group transportation throughout Florida and the continental U.S. We will take your group to any place you desire; the airport, sporting events, on field trips and much more! Call or email one of our representatives at martzsales@martzgroup.com to inquire.