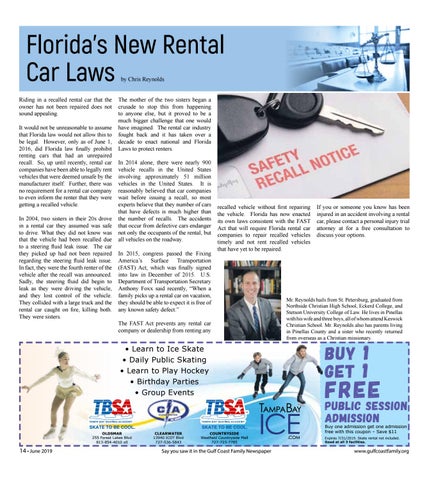 Riding in a recalled rental car that the owner has not been repaired does not sound appealing. It would not be unreasonable to assume that Florida law would not allow this to be legal. However, only as of June 1, 2016, did Florida law finally prohibit renting cars that had an unrepaired recall. So, up until recently, rental car companies have been able to legally rent vehicles that were deemed unsafe by the manufacturer itself. Further, there was no requirement for a rental car company to even inform the renter that they were getting a recalled vehicle. In 2004, two sisters in their 20s drove in a rental car they assumed was safe to drive. What they did not know was that the vehicle had been recalled due to a steering fluid leak issue. The car they picked up had not been repaired regarding the steering fluid leak issue. In fact, they were the fourth renter of the vehicle after the recall was announced. Sadly, the steering fluid did begin to leak as they were driving the vehicle, and they lost control of the vehicle. They collided with a large truck and the rental car caught on fire, killing both. They were sisters.

The mother of the two sisters began a crusade to stop this from happening to anyone else, but it proved to be a much bigger challenge that one would have imagined. The rental car industry fought back and it has taken over a decade to enact national and Florida Laws to protect renters. In 2014 alone, there were nearly 900 vehicle recalls in the United States involving approximately 51 million vehicles in the United States. It is reasonably believed that car companies wait before issuing a recall, so most experts believe that they number of cars that have defects is much higher than the number of recalls. The accidents that occur from defective cars endanger not only the occupants of the rental, but all vehicles on the roadway. In 2015, congress passed the Fixing America’s Surface Transportation (FAST) Act, which was finally signed into law in December of 2015. U.S. Department of Transportation Secretary Anthony Foxx said recently, “When a family picks up a rental car on vacation, they should be able to expect it is free of any known safety defect.”

If you or someone you know has been injured in an accident involving a rental car, please contact a personal injury trial attorney at for a free consultation to discuss your options.

Mr. Reynolds hails from St. Petersburg, graduated from Northside Christian High School, Eckerd College, and Stetson University College of Law. He lives in Pinellas with his wife and three boys, all of whom attend Keswick Christian School. Mr. Reynolds also has parents living in Pinellas County and a sister who recently returned from overseas as a Christian missionary.

Buy one admission get one admission free with this coupon – Save $11 Expires 7/31/2019. Skate rental not included. Good at all 3 facilities.