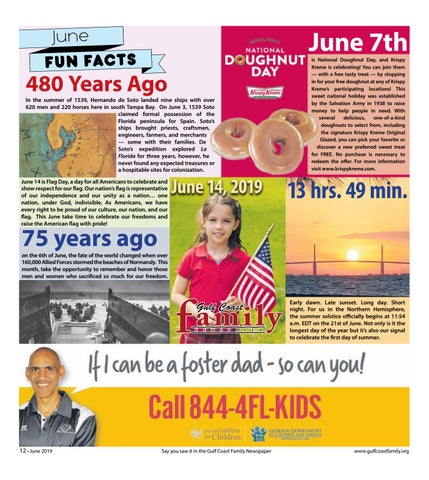 In the summer of 1539, Hernando de Soto landed nine ships with over 620 men and 220 horses here in south Tampa Bay. On June 3, 1539 Soto claimed formal possession of the Florida peninsula for Spain. Soto’s ships brought priests, craftsmen, engineers, farmers, and merchants — some with their families. De Soto’s expedition explored La Florida for three years, however, he never found any expected treasures or a hospitable sites for colonization. June 14 is Flag Day, a day for all Americans to celebrate and show respect for our flag. Our nation’s flag is representative of our independence and our unity as a nation… one nation, under God, indivisible. As Americans, we have every right to be proud of our culture, our nation, and our flag. This June take time to celebrate our freedoms and raise the American flag with pride!

is National Doughnut Day, and Krispy Kreme is celebrating! You can join them — with a free tasty treat — by stopping in for your free doughnut at any of Krispy Kreme’s participating locations! This sweet national holiday was established by the Salvation Army in 1938 to raise money to help people in need. With several delicious, one-of-a-kind doughnuts to select from, including the signature Krispy Kreme Original Glazed, you can pick your favorite or discover a new preferred sweet treat for FREE. No purchase is necessary to redeem the offer. For more information visit www.krispykreme.com.

on the 6th of June, the fate of the world changed when over 160,000 Allied Forces stormed the beaches of Normandy. This month, take the opportunity to remember and honor those men and women who sacrificed so much for our freedom.

Early dawn. Late sunset. Long day. Short night. For us in the Northern Hemisphere, the summer solstice officially begins at 11:54 a.m. EDT on the 21st of June. Not only is it the longest day of the year but it’s also our signal to celebrate the first day of summer.