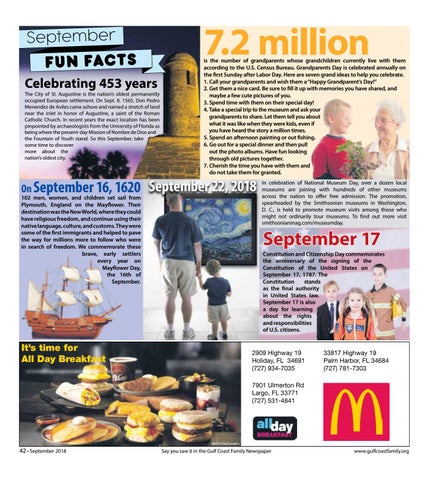 The City of St. Augustine is the nation’s oldest permanently occupied European settlement. On Sept. 8. 1565, Don Pedro Menendez de Aviles came ashore and named a stretch of land near the inlet in honor of Augustine, a saint of the Roman Catholic Church. In recent years the exact location has been pinpointed by archaeologists from the University of Florida as being where the present-day Mission of Nombre de Dios and the Fountain of Youth stand. So this September, take some time to discover more about the nation’s oldest city.

102 men, women, and children set sail from Plymouth, England on the Mayflower. Their destination was the New World, where they could have religious freedom, and continue using their native language, culture, and customs. They were some of the first immigrants and helped to pave the way for millions more to follow who were in search of freedom. We commemorate these brave, early settlers every year on Mayflower Day, the 16th of September.

is the number of grandparents whose grandchildren currently live with them according to the U.S. Census Bureau. Grandparents Day is celebrated annually on the first Sunday after Labor Day. Here are seven grand ideas to help you celebrate. 1. Call your grandparents and wish them a “Happy Grandparent’s Day!” 2. Get them a nice card. Be sure to fill it up with memories you have shared, and maybe a few cute pictures of you. 3. Spend time with them on their special day! 4. Take a special trip to the museum and ask your grandparents to share. Let them tell you about what it was like when they were kids, even if you have heard the story a million times. 5. Spend an afternoon painting or out fishing. 6. Go out for a special dinner and then pull out the photo albums. Have fun looking through old pictures together. 7. Cherish the time you have with them and do not take them for granted.

In celebration of National Museum Day, over a dozen local museums are joining with hundreds of other museums across the nation to offer free admission. The promotion, spearheaded by the Smithsonian museums in Washington, D. C., is held to promote museum visits among those who might not ordinarily tour museums. To find out more visit smithsonianmag.com/museumday.

It’s time for All Day Breakfast