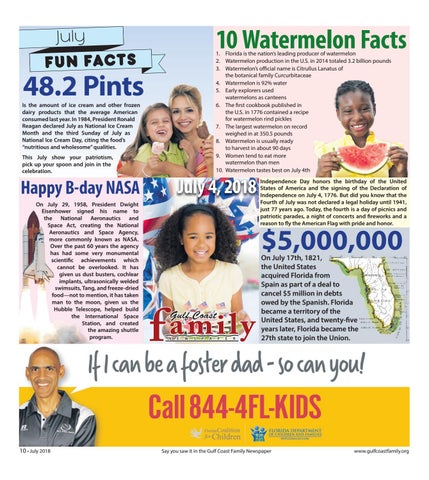 Is the amount of ice cream and other frozen dairy products that the average American consumed last year. In 1984, President Ronald Reagan declared July as National Ice Cream Month and the third Sunday of July as National Ice Cream Day, citing the food’s “nutritious and wholesome” qualities. This July show your patriotism, pick up your spoon and join in the celebration.

Happy B-day NASA On July 29, 1958, President Dwight Eisenhower signed his name to the National Aeronautics and Space Act, creating the National Aeronautics and Space Agency, more commonly known as NASA. Over the past 60 years the agency has had some very monumental scientific achievements which cannot be overlooked. It has given us dust busters, cochlear implants, ultrasonically welded swimsuits, Tang, and freeze-dried food—not to mention, it has taken man to the moon, given us the Hubble Telescope, helped build the International Space Station, and created the amazing shuttle program.

10 Watermelon Facts 1. Florida is the nation’s leading producer of watermelon 2. Watermelon production in the U.S. in 2014 totaled 3.2 billion pounds 3. Watermelon’s oﬃcial name is Citrullus Lanatus of the botanical family Curcurbitaceae 4. Watermelon is 92% water 5. Early explorers used watermelons as canteens 6. The first cookbook published in the U.S. in 1776 contained a recipe for watermelon rind pickles 7. The largest watermelon on record weighed in at 350.5 pounds 8. Watermelon is usually ready to harvest in about 90 days 9. Women tend to eat more watermelon than men 10. Watermelon tastes best on July 4th

Independence Day honors the birthday of the United States of America and the signing of the Declaration of Independence on July 4, 1776. But did you know that the Fourth of July was not declared a legal holiday until 1941, just 77 years ago. Today, the fourth is a day of picnics and patriotic parades, a night of concerts and fireworks and a reason to fly the American Flag with pride and honor.