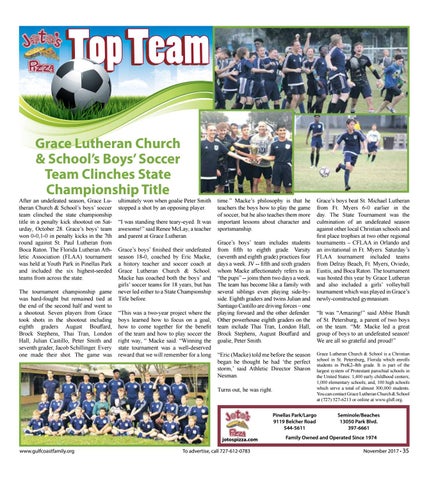 After an undefeated season, Grace Lutheran Church & School’s boys’ soccer team clinched the state championship title in a penalty kick shootout on Saturday, October 28. Grace’s boys’ team won 0-0,1-0 in penalty kicks in the 7th round against St. Paul Lutheran from Boca Raton. The Florida Lutheran Athletic Association (FLAA) tournament was held at Youth Park in Pinellas Park and included the six highest-seeded teams from across the state.

The tournament championship game was hard-fought but remained tied at the end of the second half and went to a shootout. Seven players from Grace took shots in the shootout including eighth graders August Bouffard, Brock Stephens, Thai Tran, London Hall, Julian Castillo, Peter Smith and seventh grader, Jacob Schillinger. Every one made their shot. The game was

ultimately won when goalie Peter Smith stopped a shot by an opposing player. “I was standing there teary-eyed. It was awesome!” said Renee McLay, a teacher and parent at Grace Lutheran. Grace’s boys’ finished their undefeated season 18-0, coached by Eric Macke, a history teacher and soccer coach at Grace Lutheran Church & School. Macke has coached both the boys’ and girls’ soccer teams for 18 years, but has never led either to a State Championship Title before. “This was a two-year project where the boys learned how to focus on a goal, how to come together for the benefit of the team and how to play soccer the right way, “ Macke said. “Winning the state tournament was a well-deserved reward that we will remember for a long

time.” Macke’s philosophy is that he teachers the boys how to play the game of soccer, but he also teaches them more important lessons about character and sportsmanship. Grace’s boys’ team includes students from fifth to eighth grade. Varsity (seventh and eighth grade) practices four days a week. JV -- fifth and sixth graders whom Macke affectionately refers to as “the pups” -- joins them two days a week. The team has become like a family with several siblings even playing side-byside. Eighth graders and twins Julian and Santiago Castillo are driving forces – one playing forward and the other defender. Other powerhouse eighth graders on the team include Thai Tran, London Hall, Brock Stephens, August Bouffard and goalie, Peter Smith. “Eric (Macke) told me before the season began he thought he had ‘the perfect storm,’ said Athletic Director Sharon Nesman. Turns out, he was right.

Grace’s boys beat St. Michael Lutheran from Ft. Myers 6-0 earlier in the day. The State Tournament was the culmination of an undefeated season against other local Christian schools and first place trophies at two other regional tournaments – CFLAA in Orlando and an invitational in Ft. Myers. Saturday’s FLAA tournament included teams from Delray Beach, Ft. Myers, Oviedo, Eustis, and Boca Raton. The tournament was hosted this year by Grace Lutheran and also included a girls’ volleyball tournament which was played in Grace’s newly-constructed gymnasium. “It was “Amazing!” said Abbie Hundt of St. Petersburg, a parent of two boys on the team. “Mr. Macke led a great group of boys to an undefeated season! We are all so grateful and proud!” Grace Lutheran Church & School is a Christian school in St. Petersburg, Florida which enrolls students in PreK2–8th grade. It is part of the largest system of Protestant parochial schools in the United States: 1,400 early childhood centers; 1,000 elementary schools; and, 100 high schools which serve a total of almost 300,000 students. You can contact Grace Lutheran Church & School at (727) 527-6213 or online at www.glsfl.org.