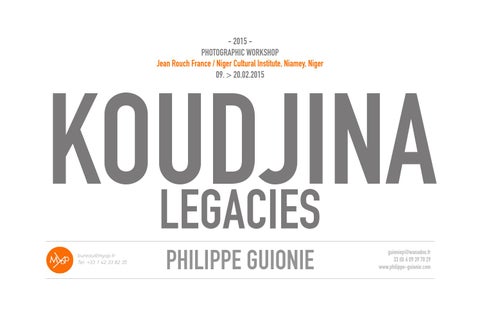 After completing two photographic workshops in Niamey in 2012 and 2013, the French photographer Philippe Guionie returned to Niger in February 2015 for a new project, the purpose of which was to pay a special tribute to the renowned photographer from Niger called Philippe Koudjina Ayi, who passed away in 2014. This entailed accompanying some of the original photographers from Niger (mostly those who had participated in both of the previous workshop cycles) for a period of two weeks. Well-known as a visual chronicler of the ‘crazy Niamey nights’ in the 1970s, Philippe Koudjina Ayi created a remarkable body of work. Over the course of this workshop, each participant produced a photographic series which drew on one of the themes previously explored by Philippe Koudjina Ayi — celebrations, nightlife, studio portraits, in situ documentary portraiture or daily life. In this way, each series provided both a unique homage to this famous Nigerien photographer and a fresh artistic view of the multifaceted nature of contemporary Niger.

A historian by training, Philippe Guionie is the exponent of a documentarystyle photography which addresses themes of memory and the various constructs which surround identity. His principal mode of representation is the portrait. His guiding principle as a photographer: to put faces to those human memories which lack them, often by bringing together photos and sound recordings. Through his photography, he writes a human history and inscribes it in time, both in terms of collective memory and contemporary experience. He is the author of several photographic works which include ‘African exsoldiers’, ‘A small corner of paradise’ (Les Imaginayres / Diaphane, 2006), ‘Africa-America’. (Diaphane, 2006) & “Swimming in the black sea” (Filigranes éditions, 2014); his personal themes are displayed in galleries and festivals, in France and abroad (Arles Meetings, the Sète festival of ImageSingulières, Gallery of the Château d’Eau in Toulouse, Polka Gallery in Paris, Tbilisi Photo Festival in Georgia, various French cultural institutes in Africa and network of French alliances in South America,…). A winner of numerous photographic prizes including the Prix Roger Pic 2008 for his photographic series entitled ‘The rifleman and the three rivers’, he is in charge of a course on the Semiology of the Image at the Training College for Photography and Multimedia in Toulouse (ETPA) and leads a whole host of workshops in France ( Arles Meetings ) and abroad. A member of the Myop Agency since 2009, Philippe Guionie is represented by the Polka Gallery in Paris. Member of the Myop Agency since 2009 Represented by Gallery Polka (Paris) since 2011 Teacher at ETPA Toulouse since 2008 Lead Instructor at the Arles Meetings since 2012

A well-known visual chronicler of the ‘crazy Niamey nights’ of the 1960s and 1970s, Philippe Koudjina Ayi is the creator of a remarkable body of work which, as yet, has gone largely unnoticed. He died in 2014.

The portraits of Apsatou Bagaya appear strange and disconcerting. They pose questions about the true nature of the person who is being photographed. However, even if the subject’s face and body are hidden from the onlooker, these decontextualized portraits tell quite an unusual story, of young female Nigerien students, whose photos are taken every morning on the Abdou Moumouni University campus in Niamey. By recreating the conditions of a photographic studio in situ ( portraits on a white background ), Apsatou brings a unique focus to the ways in which today’s Nigerien women are represented — at a time when this country of the Sahel Belt is experiencing a whole host of social and religious tensions.

Philippe Koudjina Ayi was the famous chronicler of the ‘crazy Niamey nights’ in the 1960s and 1970s. Fifty years later, Oumarou Kadry revisits the nightlife of Niamey from his perspective, creating evanescent, blurry shots in a synthesis of unlikely shapes and evocative colours.

Frontal views and sharpness are the two defining elements of Souley Abdoulaye’s work in this series entitled ‘Monoliths’. As in a systematic inventory, (when framing and distance from the subject is kept constant), Souley photographs numerous wrecks of all manner of vehicles that lie abandoned in the outskirts of the capital. They might be cars, lorries or tractors and they give us both a quirky insight into daily life as experienced by the population and their surrounding space. On closer inspection, however, the photographer’s intention becomes clearer. By systematically photographing these wrecks in an advanced state of decay — half-way between being completely abandoned or revisited and at the mercy of the combined forces of Man and Nature — Souley conjures an improbable urban choreography. Each photograph expresses a visual performance, a tableau vivant of an urban reality on which the march of time has left its tracks. Time can warp materials and distort geometric shapes from their original form. By combining techniques normally associated with landscape and heritage photography, the ‘Monoliths’ series invites us to ponder on the passing of time.

‘Niamey Blues’ is a unique journey into the heart of Niamey and the heart of night. Here, we discern the presence of people through iconic silhouettes. Dourfaye’s photographs are mostly blurry — this does not detract from his essential brief — which is not to present us with a faithful representation of Niamey’s wild, expansive architecture or its urban hustle and bustle — but to offer us a subjective focus on the city where time, in some way, stands still. Dourfaye allows us to get a glimpse of the city in which he grew up and where he still lives today. In his photographs, behind the reality we sense a vision of an underlying irreality which is fragile and distant. He photographs as he lives, by instinct. This series sits perfectly in the tradition of photographers who have a clear artistic voice. He prefers to hint at things rather than show us the whole picture. In helping us to see like this, he invites us to dream.

The series entitled ‘Faces’ is a declaration of love to the women of Niger. Tagaza Djibo reveals their subtle beauty through the filter of the religious veil — both a forbidden frontier and a subject of myriad curiosities. Using respectful, frontal face-to-face shots, he reveals his subject sometimes in part, sometimes in full. Neither fully sharp, nor completely blurry, these timeless portraits pose questions — both about the very existence of these women and also about their anonymity in the public domain.

Are we looking at a giant’s footsteps? This series entitled ‘Urban Rhythms’ by Ousmane Ibrahim grabs our attention from the very first glance. Where am I? We are not accustomed to seeing the city from this perspective. Viewed from the ground, the world is different. Ousmane offers us a selection of such sights from an urban choreography as yet incomplete. He shows us Niamey in a way no one has attempted before. With his bold and innovative photographic point of view, he imbues each little ritual of daily life with a sense of mischief and daring. After completing two photographic workshops in Niamey in 2012 and 2013, the French photographer Philippe Guionie returned to Niger in Februa...

After completing two photographic workshops in Niamey in 2012 and 2013, the French photographer Philippe Guionie returned to Niger in Februa...