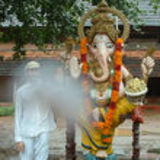 Gian Paolo Guerini was born Taurus around the middle of the XX century, in the South of Europe, in a little town equidistant from Milano, Bergamo, Brescia, Cremona, Pavia. He has studied in a Jesuit school where he grew a complete aversion for dogmatism, he prefers unconditionally the "via negationis". He wouldn't took his degree in theology with a thesis about Þe Clowde of Vnknowyng. He is teacher of transcendental literature at the University of Oblivion in a desolated land, where he teaches how to set the writing free from culture. After Crema, Brescia, Bergamo, Berlin, Paris, Livorno, New York, Fort Kochi, he lives among Torino, Roma, Ljubljana with two sons and their mother. He's waiting patiently for the things that should happen to happen.