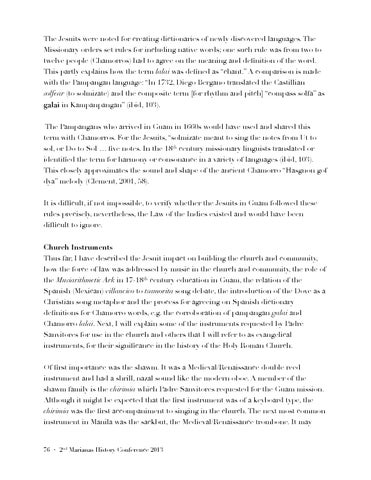 The Jesuits were noted for creating dictionaries of newly discovered languages. The Missionary orders set rules for including native words; one such rule was from two to twelve people (Chamorros) had to agree on the meaning and definition of the word. This partly explains how the term lalai was defined as “chant.” A comparison is made with the Pampangan language: “In 1732, Diego Bergano translated the Castillian solfear (to solmizate) and the composite term [for rhythm and pitch] “compass solfa” as galai in Kampanpangan” (ibid, 103).

The Pampangans who arrived in Guam in 1660s would have used and shared this term with Chamorros. For the Jesuits, “solmizate meant to sing the notes from Ut to sol, or Do to Sol … five notes. In the 18th century missionary linguists translated or identified the term for harmony or consonance in a variety of languages (ibid, 103). This closely approximates the sound and shape of the ancient Chamorro “Hasgnon gof dya” melody (Clement, 2001, 58).

It is difficult, if not impossible, to verify whether the Jesuits in Guam followed these rules precisely, nevertheless, the Law of the Indies existed and would have been difficult to ignore.

Church Instruments Thus far, I have described the Jesuit impact on building the church and community, how the force of law was addressed by music in the church and community, the role of the Musiarithmetic Ark in 17-18th century education in Guam, the relation of the Spanish (Mexican) villancico to tsamorita song debate, the introduction of the Dove as a Christian song metaphor and the process for agreeing on Spanish dictionary definitions for Chamorro words, e.g. the corroboration of pampangan galai and Chamorro lalai. Next, I will explain some of the instruments requested by Padre Sanvitores for use in the church and others that I will refer to as evangelical instruments, for their significance in the history of the Holy Roman Church.

Of first importance was the shawm. It was a Medieval/Renaissance double reed instrument and had a shrill, nazal sound like the modern oboe. A member of the shawm family is the chirimia which Padre Sanvitores requested for the Guam mission. Although it might be expected that the first instrument was of a keyboard type, the chirimia was the first accompaniment to singing in the church. The next most common instrument in Manila was the sackbut, the Medieval/Renaissance trombone. It may