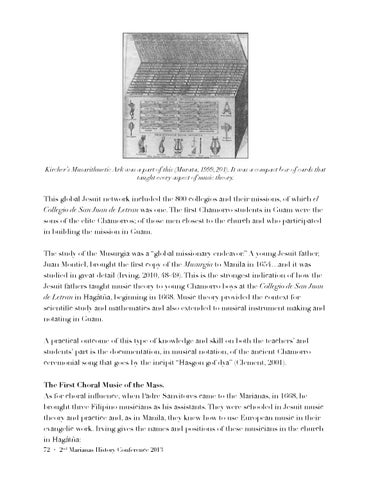 Kircher’s Musarithmetic Ark was a part of this (Murata, 1999, 201). It was a compact box of cards that taught every aspect of music theory.

This global Jesuit network included the 800 collegios and their missions, of which el Collegio de San Juan de Letran was one. The first Chamorro students in Guam were the sons of the elite Chamorros; of those men closest to the church and who participated in building the mission in Guam.

The study of the Musurgia was a “global missionary endeavor.” A young Jesuit father, Juan Montiel, brought the first copy of the Musurgia to Manila in 1654…and it was studied in great detail (Irving, 2010, 48-49). This is the strongest indication of how the Jesuit fathers taught music theory to young Chamorro boys at the Collegio de San Juan de Letran in Hagåtña, beginning in 1668. Music theory provided the context for scientific study and mathematics and also extended to musical instrument making and notating in Guam.

A practical outcome of this type of knowledge and skill on both the teachers’ and students’ part is the documentation, in musical notation, of the ancient Chamorro ceremonial song that goes by the incipit “Hasgon gof dya” (Clement, 2001).

The First Choral Music of the Mass. As for choral influence, when Padre Sanvitores came to the Marianas, in 1668, he brought three Filipino musicians as his assistants. They were schooled in Jesuit music theory and practice and, as in Manila, they knew how to use European music in their evangelic work. Irving gives the names and positions of these musicians in the church in Hagåtña: 72 ! ・ 2nd Marianas History Conference 2013