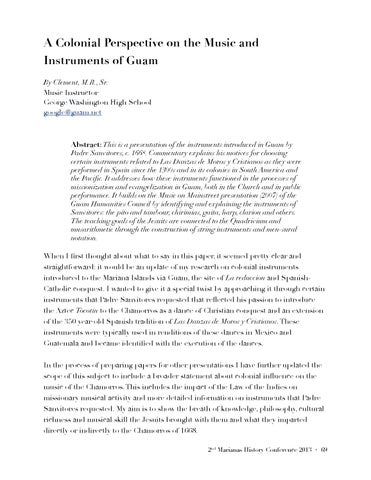 A Colonial Perspective on the Music and Instruments of Guam

Abstract: This is a presentation of the instruments introduced in Guam by Padre Sanvitores, c. 1668. Commentary explains his motives for choosing certain instruments related to Las Danzas de Moros y Cristianos as they were performed in Spain since the 1300s and in its colonies in South America and the Pacific. It addresses how these instruments functioned in the processes of missionization and evangelization in Guam, both in the Church and in public performance. It builds on the Music on Mainstreet presentation (2007) of the Guam Humanities Council by identifying and explaining the instruments of Sanvitores: the pito and tambour, chirimias, gaita, harp, clarion and others. The teaching goals of the Jesuits are connected to the Quadrivium and musarithmetic through the construction of string instruments and men-sural notation. When I first thought about what to say in this paper, it seemed pretty clear and straightforward: it would be an update of my research on colonial instruments introduced to the Mariana Islands via Guam, the site of La reduccion and SpanishCatholic conquest. I wanted to give it a special twist by approaching it through certain instruments that Padre Sanvitores requested that reflected his passion to introduce the Aztec Tocotin to the Chamorros as a dance of Christian conquest and an extension of the 350 year-old Spanish tradition of Las Danzas de Moros y Cristianos. These instruments were typically used in renditions of these dances in Mexico and Guatemala and became identified with the execution of the dances.

In the process of preparing papers for other presentations I have further updated the scope of this subject to include a broader statement about colonial influence on the music of the Chamorros. This includes the impact of the Law of the Indies on missionary musical activity and more detailed information on instruments that Padre Sanvitores requested. My aim is to show the breath of knowledge, philosophy, cultural richness and musical skill the Jesuits brought with them and what they imparted directly or indirectly to the Chamorros of 1668. 2nd Marianas History Conference 2013 ă&#x192;ť !69