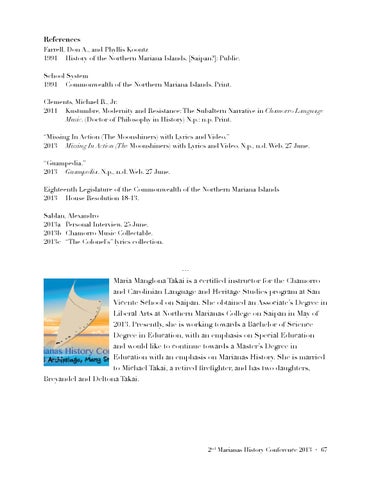 Eighteenth Legislature of the Commonwealth of the Northern Mariana Islands 2013 House Resolution 18-13.

Maria Manglona Takai is a certified instructor for the Chamorro and Carolinian Language and Heritage Studies program at San Vicente School on Saipan. She obtained an Associate’s Degree in Liberal Arts at Northern Marianas College on Saipan in May of 2013. Presently, she is working towards a Bachelor of Science Degree in Education, with an emphasis on Special Education and would like to continue towards a Master’s Degree in Education with an emphasis on Marianas History. She is married to Michael Takai, a retired firefighter, and has two daughters, Breyandel and Deltona Takai.