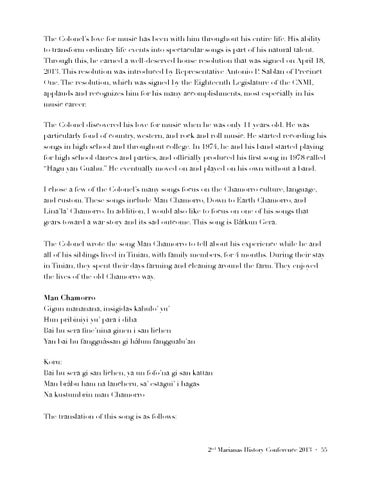 The Colonel’s love for music has been with him throughout his entire life. His ability to transform ordinary life events into spectacular songs is part of his natural talent. Through this, he earned a well-deserved house resolution that was signed on April 18, 2013. This resolution was introduced by Representative Antonio P. Sablan of Precinct One. The resolution, which was signed by the Eighteenth Legislature of the CNMI, applauds and recognizes him for his many accomplishments, most especially in his music career.

The Colonel discovered his love for music when he was only 11 years old. He was particularly fond of country, western, and rock and roll music. He started recording his songs in high school and throughout college. In 1974, he and his band started playing for high school dances and parties, and officially produced his first song in 1978 called “Hagu yan Guahu.” He eventually moved on and played on his own without a band.

I chose a few of the Colonel’s many songs focus on the Chamorro culture, language, and custom. These songs include Man Chamorro, Down to Earth Chamorro, and Lina’la’ Chamorro. In addition, I would also like to focus on one of his songs that gears toward a war story and its sad outcome. This song is Båtkun Gera.

The Colonel wrote the song Man Chamorro to tell about his experience while he and all of his siblings lived in Tinian, with family members, for 4 months. During their stay in Tinian, they spent their days farming and cleaning around the farm. They enjoyed the lives of the old Chamorro way.

! The translation of this song is as follows: ! !