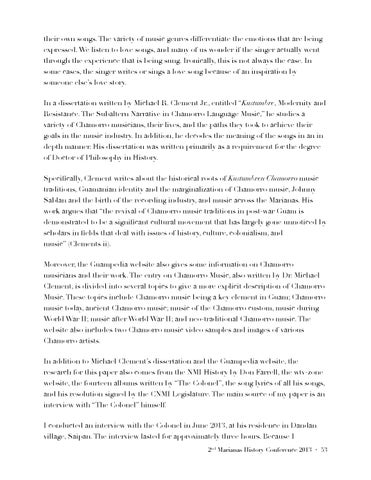 their own songs. The variety of music genres differentiate the emotions that are being expressed. We listen to love songs, and many of us wonder if the singer actually went through the experience that is being sung. Ironically, this is not always the case. In some cases, the singer writes or sings a love song because of an inspiration by someone else’s love story.

In a dissertation written by Michael R. Clement Jr., entitled “Kustumbre, Modernity and Resistance. The Subaltern Narrative in Chamorro Language Music,” he studies a variety of Chamorro musicians, their lives, and the paths they took to achieve their goals in the music industry. In addition, he decodes the meaning of the songs in an in depth manner. His dissertation was written primarily as a requirement for the degree of Doctor of Philosophy in History.

Specifically, Clement writes about the historical roots of Kustumbren Chamorro music traditions, Guamanian identity and the marginalization of Chamorro music, Johnny Sablan and the birth of the recording industry, and music across the Marianas. His work argues that “the revival of Chamorro music traditions in post-war Guam is demonstrated to be a significant cultural movement that has largely gone unnoticed by scholars in fields that deal with issues of history, culture, colonialism, and music” (Clements ii).

In addition to Michael Clement’s dissertation and the Guampedia website, the research for this paper also comes from the NMI History by Don Farrell, the wtv-zone website, the fourteen albums written by “The Colonel”, the song lyrics of all his songs, and his resolution signed by the CNMI Legislature. The main source of my paper is an interview with “The Colonel” himself.

I conducted an interview with the Colonel in June 2013, at his residence in Dandan village, Saipan. The interview lasted for approximately three hours. Because I 2nd Marianas History Conference 2013 ・ !53