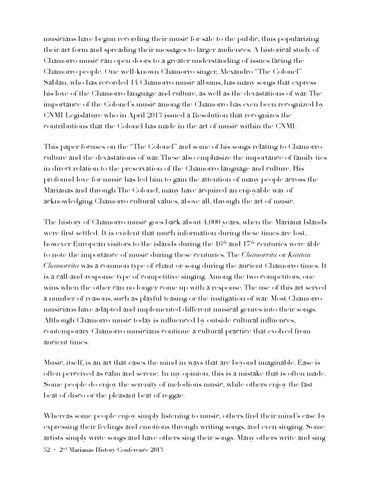 musicians have begun recording their music for sale to the public, thus popularizing their art form and spreading their messages to larger audiences. A historical study of Chamorro music can open doors to a greater understanding of issues facing the Chamorro people. One well-known Chamorro singer, Alexandro “The Colonel” Sablan, who has recorded 14 Chamorro music albums, has many songs that express his love of the Chamorro language and culture, as well as the devastations of war. The importance of the Colonel’s music among the Chamorro has even been recognized by CNMI Legislature who in April 2013 issued a Resolution that recognizes the contributions that the Colonel has made in the art of music within the CNMI.

This paper focuses on the “The Colonel” and some of his songs relating to Chamorro culture and the devastations of war. These also emphasize the importance of family ties in direct relation to the preservation of the Chamorro language and culture. His profound love for music has led him to gain the attention of many people across the Marianas and through The Colonel, many have acquired an enjoyable way of acknowledging Chamorro cultural values, above all, through the art of music.

The history of Chamorro music goes back about 4,000 years, when the Mariana Islands were first settled. It is evident that much information during these times are lost, however European visitors to the islands during the 16th and 17th centuries were able to note the importance of music during these centuries. The Chamorrita or Kantan Chamorrita was a common type of chant or song during the ancient Chamorro times. It is a call-and-response type of competitive singing. Among the two competitors, one wins when the other can no longer come up with a response. The use of this art served a number of reasons, such as playful teasing or the instigation of war. Most Chamorro musicians have adapted and implemented different musical genres into their songs. Although Chamorro music today is influenced by outside cultural influences, contemporary Chamorro musicians continue a cultural practice that evolved from ancient times.

Music, itself, is an art that eases the mind in ways that are beyond imaginable. Ease is often perceived as calm and serene. In my opinion, this is a mistake that is often made. Some people do enjoy the serenity of melodious music, while others enjoy the fast beat of disco or the pleasant beat of reggae.

Whereas some people enjoy simply listening to music, others find their mind’s ease by expressing their feelings and emotions through writing songs, and even singing. Some artists simply write songs and have others sing their songs. Many others write and sing 52 ! ・ 2nd Marianas History Conference 2013