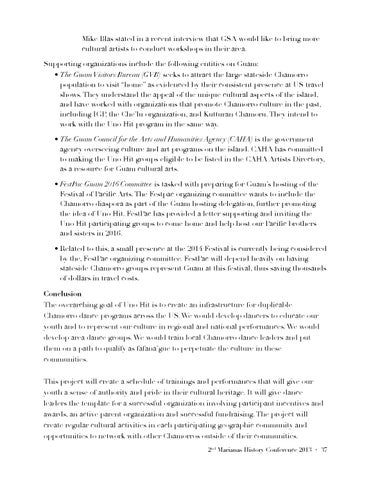 Mike Blas stated in a recent interview that GSA would like to bring more cultural artists to conduct workshops in their area. Supporting organizations include the following entities on Guam: • The Guam Visitors Bureau (GVB) seeks to attract the large stateside Chamorro population to visit “home” as evidenced by their consistent presence at US travel shows. They understand the appeal of the unique cultural aspects of the island, and have worked with organizations that promote Chamorro culture in the past, including IGP, the Che’lu organization, and Kutturan Chamoru. They intend to work with the Uno Hit program in the same way. • The Guam Council for the Arts and Humanities Agency (CAHA) is the government agency overseeing culture and art programs on the island. CAHA has committed to making the Uno Hit groups eligible to be listed in the CAHA Artists Directory, as a resource for Guam cultural arts. • FestPac Guam 2016 Committee is tasked with preparing for Guam’s hosting of the Festival of Pacific Arts. The Festpac organizing committee wants to include the Chamorro diaspora as part of the Guam hosting delegation, further promoting the idea of Uno Hit. FestPac has provided a letter supporting and inviting the Uno Hit participating groups to come home and help host our Pacific brothers and sisters in 2016. • Related to this, a small presence at the 2014 Festival is currently being considered by the, FestPac organizing committee. FestPac will depend heavily on having stateside Chamorro groups represent Guam at this festival, thus saving thousands of dollars in travel costs. Conclusion The overarching goal of Uno Hit is to create an infrastructure for duplicable Chamorro dance programs across the US. We would develop dancers to educate our youth and to represent our culture in regional and national performances. We would develop area dance groups. We would train local Chamorro dance leaders and put them on a path to qualify as fafana’gue to perpetuate the culture in these communities.

This project will create a schedule of trainings and performances that will give our youth a sense of authority and pride in their cultural heritage. It will give dance leaders the template for a successful organization involving participant incentives and awards, an active parent organization and successful fundraising. The project will create regular cultural activities in each participating geographic community and opportunities to network with other Chamorros outside of their communities. 2nd Marianas History Conference 2013 ・ !37