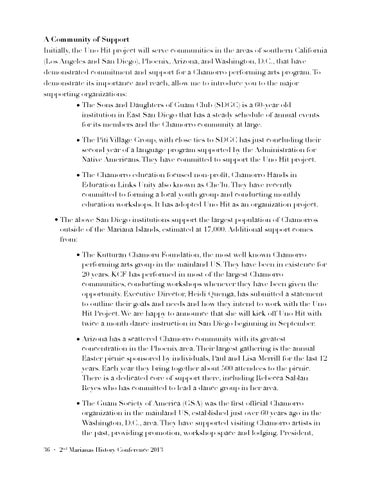 A Community of Support Initially, the Uno Hit project will serve communities in the areas of southern California (Los Angeles and San Diego), Phoenix, Arizona, and Washington, D.C., that have demonstrated commitment and support for a Chamorro performing arts program. To demonstrate its importance and reach, allow me to introduce you to the major supporting organizations: • The Sons and Daughters of Guam Club (SDGC) is a 60-year old institution in East San Diego that has a steady schedule of annual events for its members and the Chamorro community at large. • The Piti Village Group, with close ties to SDGC has just concluding their second year of a language program supported by the Administration for Native Americans. They have committed to support the Uno Hit project. • The Chamorro education focused non-profit, Chamorro Hands in Education Links Unity also known as Che’lu. They have recently committed to forming a local youth group and conducting monthly education workshops. It has adopted Uno Hit as an organization project. • The above San Diego institutions support the largest population of Chamorros outside of the Mariana Islands, estimated at 17,000. Additional support comes from: • The Kutturan Chamoru Foundation, the most well known Chamorro performing arts group in the mainland US. They have been in existence for 20 years. KCF has performed in most of the largest Chamorro communities, conducting workshops whenever they have been given the opportunity. Executive Director, Heidi Quenga, has submitted a statement to outline their goals and needs and how they intend to work with the Uno Hit Project. We are happy to announce that she will kick off Uno Hit with twice a month dance instruction in San Diego beginning in September. • Arizona has a scattered Chamorro community with its greatest concentration in the Phoenix area. Their largest gathering is the annual Easter picnic sponsored by individuals, Paul and Lisa Merrill for the last 12 years. Each year they bring together about 500 attendees to the picnic. There is a dedicated core of support there, including Rebecca Sablan Reyes who has committed to lead a dance group in her area. • The Guam Society of America (GSA) was the first official Chamorro organization in the mainland US, established just over 60 years ago in the Washington, D.C., area. They have supported visiting Chamorro artists in the past, providing promotion, workshop space and lodging. President, 36 ! ・ 2nd Marianas History Conference 2013