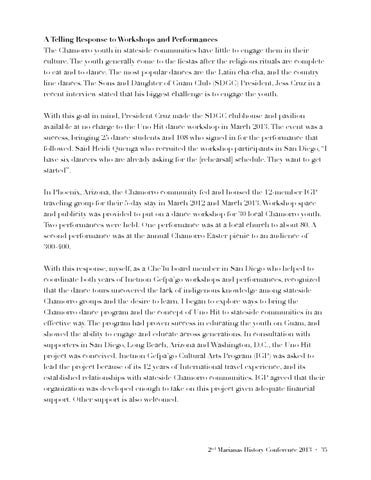 A Telling Response to Workshops and Performances The Chamorro youth in stateside communities have little to engage them in their culture. The youth generally come to the fiestas after the religious rituals are complete to eat and to dance. The most popular dances are the Latin cha-cha, and the country line dances. The Sons and Daughter of Guam Club (SDGC) President, Jess Cruz in a recent interview stated that his biggest challenge is to engage the youth.

With this goal in mind, President Cruz made the SDGC clubhouse and pavilion available at no charge to the Uno Hit dance workshop in March 2013. The event was a success, bringing 25 dance students and 108 who signed in for the performance that followed. Said Heidi Quenga who recruited the workshop participants in San Diego, “I have six dancers who are already asking for the [rehearsal] schedule. They want to get started”.

In Phoenix, Arizona, the Chamorro community fed and housed the 12-member IGP traveling group for their 5-day stay in March 2012 and March 2013. Workshop space and publicity was provided to put on a dance workshop for 30 local Chamorro youth. Two performances were held. One performance was at a local church to about 80. A second performance was at the annual Chamorro Easter picnic to an audience of 300-400.

With this response, myself, as a Che’lu board member in San Diego who helped to coordinate both years of Inetnon Gefpa’go workshops and performances, recognized that the dance tours uncovered the lack of indigenous knowledge among stateside Chamorro groups and the desire to learn. I began to explore ways to bring the Chamorro dance program and the concept of Uno Hit to stateside communities in an effective way. The program had proven success in educating the youth on Guam, and showed the ability to engage and educate across generations. In consultation with supporters in San Diego, Long Beach, Arizona and Washington, D.C., the Uno Hit project was conceived. Inetnon Gefpa’go Cultural Arts Program (IGP) was asked to lead the project because of its 12 years of International travel experience, and its established relationships with stateside Chamorro communities. IGP agreed that their organization was developed enough to take on this project given adequate financial support. Other support is also welcomed.