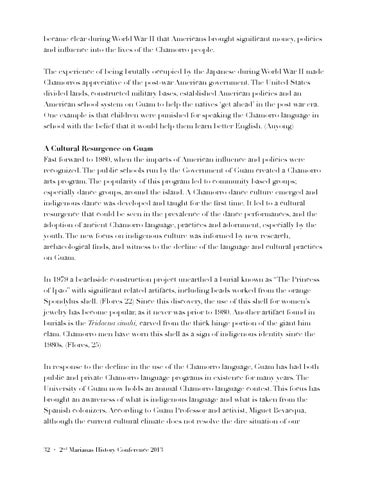 became clear during World War II that Americans brought significant money, policies and influence into the lives of the Chamorro people.

The experience of being brutally occupied by the Japanese during World War II made Chamorros appreciative of the post-war American government. The United States divided lands, constructed military bases, established American policies and an American school system on Guam to help the natives ‘get ahead’ in the post war era. One example is that children were punished for speaking the Chamorro language in school with the belief that it would help them learn better English. (Auyong)

A Cultural Resurgence on Guam Fast forward to 1980, when the impacts of American influence and policies were recognized. The public schools run by the Government of Guam created a Chamorro arts program. The popularity of this program led to community based groups; especially dance groups, around the island. A Chamorro dance culture emerged and indigenous dance was developed and taught for the first time. It led to a cultural resurgence that could be seen in the prevalence of the dance performances, and the adoption of ancient Chamorro language, practices and adornment, especially by the youth. The new focus on indigenous culture was informed by new research, archaeological finds, and witness to the decline of the language and cultural practices on Guam.

In 1979 a beachside construction project unearthed a burial known as “The Princess of Ipao” with significant related artifacts, including beads worked from the orange Spondylus shell. (Flores 22) Since this discovery, the use of this shell for women’s jewelry has become popular, as it never was prior to 1980. Another artifact found in burials is the Tridacna sinahi, carved from the thick hinge portion of the giant him clam. Chamorro men have worn this shell as a sign of indigenous identity since the 1980s. (Flores, 25)

In response to the decline in the use of the Chamorro language, Guam has had both public and private Chamorro language programs in existence for many years. The University of Guam now holds an annual Chamorro language contest. This focus has brought an awareness of what is indigenous language and what is taken from the Spanish colonizers. According to Guam Professor and activist, Miguet Bevacqua, although the current cultural climate does not resolve the dire situation of our